The Head and the Tea-seller

Now, in that town there was a king. The king had no sons and only one daughter. The daughter was ready to be married. All the young men in the town wanted to marry the king's daughter. They came to the king one by one.

"Please, sir," they all said. "Let me marry your daughter."

"What will you give me?" asked the king.

"What do you want?" the young men asked.

The head heard about the king's daughter. He said to the tea-seller, "My friend, this is a chance for me. Go to the king and say to him, 'My friend wants to marry your daughter. What do you want for her?'"

So the tea-seller went to see the king. He went into the palace and greeted him.

"Sir," he said. "My friend wants to marry your daughter. Tell me, what must he give you?"

"A camel is a fine thing," said the king.

"That's easy," thought the merchant, and he smiled.

"A he-camel," said the king. "A big, strong camel with good teeth is a very fine thing."

"I will find the best camel in the world for you, sir," he said, and he began to leave the room.

"Wait," said the king. "The camel must come here, into my palace. It must greet me and speak to me in my own language."

"If your friend cannot find this camel," said the king, "he cannot marry my daughter."

The head was waiting for him.

"What did the king say?" he asked the tea-seller.

The tea-seller shook his head.

"My poor young friend," he said. "It's impossible. The king wants a camel, a big, strong he-camel with good teeth."

"No, no," said the tea-seller. "The camel must go to the king's palace and greet him, and speak to him in his own language."

"Very well," said the head. "Now take me to the camel market."

So the tea-seller took the head to the camel market. They looked at many camels, and at last the head chose one.

"Now," said the head, "take this camel to the palace."

The tea-seller was frightened.

"But this is only a camel," he said. "It cannot greet the king, or talk in his language."

"Don't be frightened," said the head. "Everything will be all right."

So the tea-seller took the camel to the king's palace. The room was full of people. Everyone was looking at him. The tea-seller's knees were shaking.

The king saw the tea-seller and the camel beside the door. 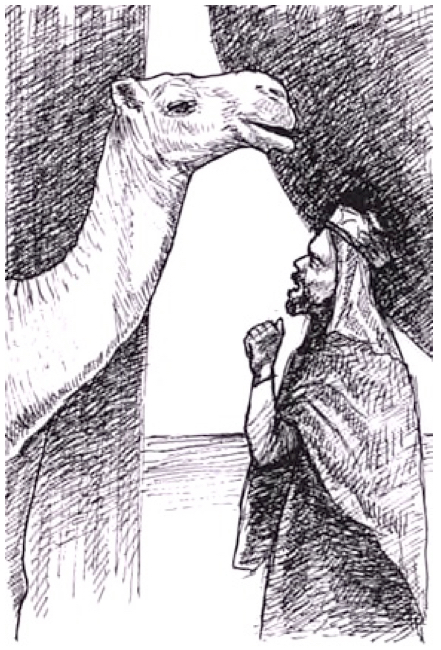 "What is this?" he shouted. "Why has this man brought a camel inside my palace?"

"Please, sir, you asked for a camel," said the tea-seller.

Then the king remembered his words. He began to laugh.

"This is only a camel," he said. "It cannot greet me, or talk to me in my own language."

The camel suddenly lifted its head.

"Ah! Oh! How wonderful!" everyone said.

The king stood up, and went to the camel.

"Can you really speak?" he asked. "Was that your voice?"

The tea-seller was even more surprised than the king, but he was very happy for his friend.

"Sir," he said. "You asked for this animal and I have brought it to you!"

The king looked at him.

"And now my daughter must marry your friend," he said. "Who is this young man? What kind of man is he?"

The tea-seller was very frightened now.