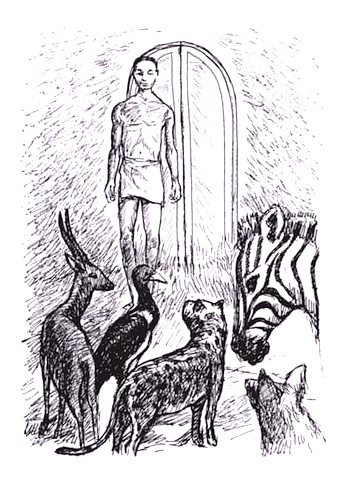 Our father, Adam, lived in the Garden of Eden. One day, God sent him out and closed the gate behind him. Then all the animals saw Adam for the first time.

They talked for a long time, and at last they called the dog.

"Dog," they said, "you can run fast, and you are brave and strong. Go to the man and talk to him."

So the dog ran to Adam.

"What kind of animal are you?" he asked Adam. "My brothers and sisters, the other animals, are afraid of you. Are you a friend or an enemy? Do you want to live peacefully with us, or fight us?"

Adam smiled at the dog.

"I have been in the Garden of Eden," he said. "I am a stranger here. I want to be your friend, not your enemy. I want to live peacefully with you."

"That's good news," said the dog, and he turned and began to run back to his friends. He ran as fast as the wind.

The other animals saw him.

The dog ran after them.

But the animals were too frightened to stop. They hid themselves in the forest. Sadly, the dog ran back to Adam.

So from that day, the dog stayed with the man, and they hunted the animals together.