Part One: The Lion's Wedding 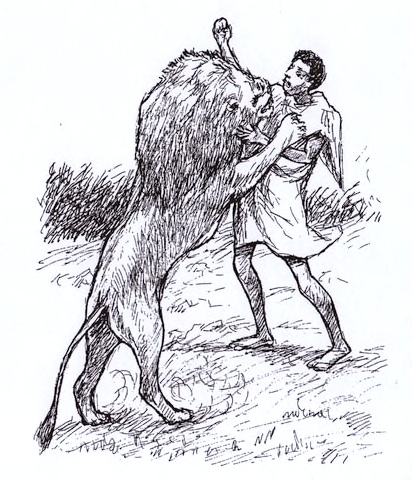 Fatuma was waiting for her bridegroom.

"Is he handsome? Is he clever?" she asked her mother.

"You will see," her mother answered. "He is coming with your dowry today."

Not far away, Fatuma's bridegroom was driving the dowry cows over the river. Suddenly, a lion jumped out of the bushes. It caught one of the dowry cows and killed it. The bridegroom did not see the lion, but he heard the noise.

He came out of the bushes, and the bridegroom saw him.

"What?" said the bridegroom. "You think you are a man? I'll show you!"

He jumped on the lion and they began to fight. Soon the lion was on the ground, and the bridegroom was on top of him.

"You see?" said the bridegroom. "You are not better than me. I am much stronger than you."

"That's not true," said the lion. "You are only strong because you have a right hand. Tie your right hand behind your back and fight with me again."

The bridegroom agreed and the lion tied his right hand behind his back. They fought again. Again, the lion fell to the ground, and the bridegroom was on top of him.

"Now what do you say?" said the bridegroom. "Who is the strongest? You or me?"

"Oh, I am the strongest," said the lion. "You won because you have a left hand. Tie your left hand behind your back and fight with me again."

So the lion tied the bridegroom's left hand behind his back. Now the bridegroom was helpless. He couldn't fight at all. At once, the lion killed him and ate him.

Then the lion put on the bridegroom's clothes and he began to drive the cows to Fatuma's village.

Everyone in the village ran out to greet the bridegroom. They clapped and shouted and sang a wedding song:

"The bridegroom comes
Take him inside!
He brings the dowry
For the bride!"

They greeted the lion and took him inside the house. He sat down with them, and they brought him food. The first dish was boiled meat.

Fatuma's family took the meat away. They fried it and brought it back.

So Fatuma's father gave the lion some raw meat and he ate it.

When the feast was finished, it was time to go to bed. Fatuma's family took the lion and his bride to their hut.

"Why?" asked Fatuma's father. "What kind of bed do you want?"

"I sleep on sticks and straw," said the lion.

So they took the bed away, and brought him sticks and straw. Now Fatuma and the lion were alone together. The lion took off his clothes, and Fatuma saw his fur. She was very frightened.

"Father, Mother
Help your child!
My husband's a lion,
Hungry and wild!"

She ran off to her parents' hut. The lion followed her quietly. Fatuma didn't see him.

Fatuma called out to her father and mother.

"No, Father," said Fatuma, "but you must help me. My husband is not a man. He's a lion! You have given your daughter to a wild animal!"

"We will test him, then," said her father. "Tomorrow morning the village will move. We are going to find water and grass for the cattle. The men will come out of their huts and shout, 'The time to move has come!' If your husband is a lion, he will not shout. And if he does not shout, I will believe you."

The lion was listening. He heard Fatuma's father's words. Quietly, he ran back to his hut.

"Now go back to your husband," Fatuma's father went on. "Do you want us to be ashamed?"

Sadly, Fatuma went back to the lion.

The next morning, the lion woke up very early. He ran outside his hut and roared:

"Why is the village still asleep?

When will the people begin to wake?

The time to move has come!"

"My daughter is a fool," he thought. "Her husband is not an animal. He is a man."

Exercises for Part One: The Lion's Wedding