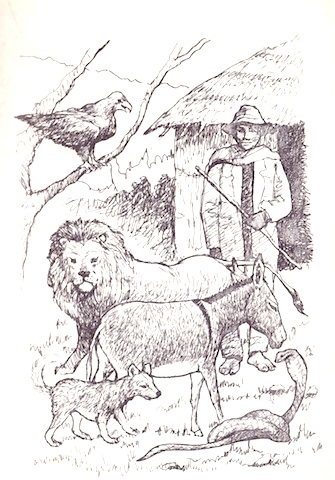 Once upon a time, a man, a lion, a donkey, a puff-adder, an eagle and a dog were going to war together. They travelled all day until at last the sun went down.

"Where are we going to sleep?" asked the donkey.

"Look," said the puff-adder. "There's a hut, and smoke is coming out of it. We can sleep there."

So they went to the hut and called out to the people inside.

A man and his wife came out.

"Please come in," they said to the travellers. "You are welcome to sleep here. But we are very poor and we have no food to give you."

"But you have a cow," the lion said. "We saw it outside your house."

"Let me have the milk," the man said. "I'll give you something wonderful one day."

"Give me the fat," said the puff-adder, "and I promise you, you won't be sorry."

"And I," said the eagle, "I want the small pieces of meat under the skin. Give them to me, and I'll reward you."

"I don't want meat," said the donkey. "But give me some grass from your roof. You'll never regret it."

So the man and his wife killed their cow. They gave the blood to the lion, the bones to the dog, the milk to the man, the fat to the puff-adder and the small pieces under the skin to the eagle. And they gave the donkey grass from the roof of the hut.

The travellers slept well that night, and the next morning they went away.

Many weeks passed. Then, one day, the man and his wife heard a loud noise near their hut. The lion was roaring. They went outside.

The lion wasn't there, but a big elephant tusk was lying on the ground.

"This is wonderful!" the woman said. "Husband, look at this tusk. It's very valuable."

"Take it into the house," her husband said. "We must be careful. Perhaps thieves will come and take it."

Just then, a dog barked.

The man and the woman looked behind them. The dog was lying beside the door of the house.

"Don't worry," he said. "I'll keep the thieves away. You helped me once and now I'll help you."

Now the man had a wicked brother. He was rich, but he was cruel and everyone hated him. He heard about the elephant tusk.

"I want that tusk," he thought. "I'll kill my brother and take it from him."

Late at night, when it was dark, he went to his brother's house. But the puff-adder was lying on the path, waiting for him. It bit the wicked brother and he died.

In that country, a dead man's brother takes his wealth. Now the wicked brother's cows and sheep belonged to the man and his wife.

"The lion, the dog and the puff-adder have repaid us well," the man said to his wife. "What will the eagle, the donkey and the man do?"

One day, the eagle was flying high in the sky. He looked down and saw a crowd of elders. They were walking together along the road and something bright was shining in their hands.

"They have money and jewels," thought the eagle. "They are taking presents from a wife to her husband, or from a husband to his wife, to end a quarrel. But they will forgive each other anyway."

He flew down and took the gifts out of the elders' hands. Then he dropped them outside the hut of the man and his wife.

On the same day, the donkey was in a forest not far away. He had a heavy bag on his back. It was full of Maria Teresa dollars.

The donkey's master was beating him.

The donkey wanted to punish his cruel master. He ran away, and came to the hut of the man and his wife.

The old man and his wife were rich now.

"Our friends the animals have been very good to us," the man said. "I'm glad we killed our cow for them."

"And the man has not repaid us yet," his wife said. "The animals have done many things for us, but a man will certainly do more."

They waited and waited. Weeks passed, then months and years, but the man never came back. The animals kept their promises, but the man forgot his.

Exercises for The Grateful Animals