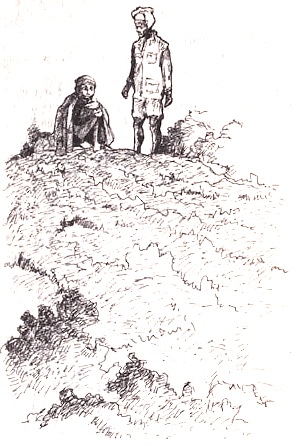 A young man once lived with his mother. She cooked his food and cleaned his house and looked after him. But one day, the man got married. His wife came to live with him and his mother.

One day, the husband came home late from the fields.

The husband called out again.

Again his wife refused to answer.

The man was angry.

His wife began to cry.

"It's your mother," she said. "She hates me. She quarrels with me all the time. 'You stupid, lazy girl,' she says. 'Why did my son marry you?' I can't live with her any longer."

The man looked at his wife. She was beautiful and he loved her.

"Please, my darling," he said. "Try to live happily with her. She's an old woman. She won't be with us for ever. Don't talk about it now. Bring me my dinner."

"Dinner?" said his wife. "There is no dinner! I can't cook when that old woman is in the house. 'Do this, do that, that's wrong, that's bad,' she says to me all the time."

That night, the man went to bed hungry. He lay down but he couldn't sleep.

"What can I do?" he thought. "How can I choose between my wife and my mother? My mother loves me. When I was a child, she fed me and looked after me. But my wife is young and beautiful. I love her. I can't live without her."

The next morning, his wife said to him, "Well, husband? Have you chosen? Do you want your mother, or do you want me?"

"You can't have both of us," said his wife. "Kill your mother. She's an old woman. She'll die soon. But I am young. We love each other. We can have many happy years together."

"Kill my mother?" the man said. "What are you saying? How can I kill my own mother?"

The man went off to work in the fields. All day he thought about his wife and his mother.

"My wife is right," he thought at last. "My mother is old. Her life is not valuable now. I will take her up the mountain and throw her over the cliff. Then my wife and I will be alone together and we'll be happy."

"Yes," answered her husband. "I have chosen you. Tomorrow I will take my mother up the mountain and throw her over the cliff. Now bring me water. I'm tired. I want to wash myself."

His wife ran to fetch the water. She came back quickly.

"Yes, yes," said his wife. "I have cooked all your favourite dishes. When your mother is dead, I will make them for you every day."

The next day, the man got up early and woke his mother.

"Mother," he said. "You and I are going on a journey today. I'll take you up the mountain. It's very cool up there. You will like it very much."

His mother looked at him. She was surprised.

He picked her up and began to carry her up the mountain. At first his mother was happy.

"This is very kind of you, my son," she said. "I haven't been here for many years. It's nice to see the old places again."

Her son said nothing. Soon the old woman stopped talking.

The mountain was very high and the road was steep. The path went up and up. Soon the man and his mother were standing at the top of a cliff.

"My son," said the old woman quietly. "I know what you want to do. I understand everything. But please be careful. Throw me over the cliff, but don't fall over yourself. Look, there is a tree. When you push me, hold a branch of the tree. Then you will be safe."

The man looked at her. He was very surprised.

"Mother," he said. "You know what I want to do. You understand everything. But you still love me! You’re still worried about me, and you don't want me to die."

She smiled sadly at him.

"Ah my dear," she said. "Only a mother knows love. One day you'll have a child of your own. Then you’ll understand. Then you’ll really love another person."

The man put his mother down and sat down beside her. He put his head in his hands and began to think.

"Does my wife love me as much as this?" he thought. "No, she doesn't. How good my mother is! How kind she is! I wanted to kill her, but she still loves me."

Then he thought about his wife.

"She's a wicked woman," he thought. "'Kill your own mother!' she said. I loved her once, but I don't love her now. I have chosen. I will keep my mother and send my wife away."

So the man carried his mother down from the mountain and took her home. And he sent his wife away, and lived happily with his mother for many, many years.

Exercises for The Mother-in-law