The Leopard and the Squirrel 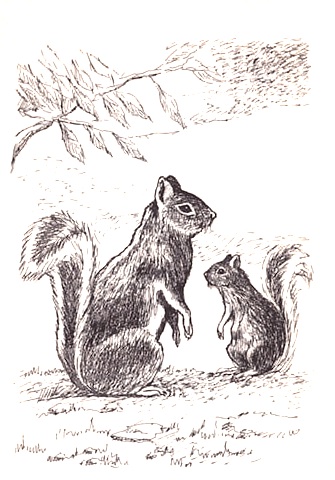 Once upon a time, there was a leopard and a squirrel. They were friends. They had a herd of goats and they looked after the goats together. One day, the leopard went out with the goats. The next day, the squirrel took the goats out.

The leopard was not a clever goatherd. He never found good grass for the goats. He never gave them enough to eat. When he took them out, the goats always came back hungry.

But the squirrel was very clever. She never went out with the goats alone. She met her mother outside in the fields and her mother came to help her. The squirrel’s mother climbed into the trees and pulled off the leaves. She threw them down to the goats and they ate them happily.

The squirrel laughed at him.

"Oh," she said. "I’m much cleverer than you. I always take the branding iron with me and I tie it to their tails. The branding iron frightens them. 'Oh!' they think. 'This branding iron will hurt us,' and they run about looking for food. But they are lazy with you. They just stand in one place. They don't try to look for food."

The leopard was angry.

"This stupid squirrel is not telling me the truth," he thought. "She's laughing at me. I'll follow her tomorrow and watch."

So the next day, the leopard followed the squirrel. He was careful. He didn't want her to see him. He watched her from far away.

The squirrel stopped under a tree and called out, "Mother! Come and help me! I have to find food for the goats!"

The squirrel's mother at once began to pull leaves off the branches and began to help her daughter.

"Look at that!" thought the leopard. "The squirrel's mother comes to help her. She's pulling leaves off the trees for the goats. They don't have any branding irons at all.”

“The squirrel thinks I'm stupid,” he thought. “She was trying to trick me. But I'll show her!"

The next day, it was his turn to take out the goats. He took them past the tree and called out, "Mother! Come and help me! I have to find food for the goats."

The squirrel’s mother ran down from the tree. At once the leopard jumped on her and killed her.

The next day, it was the squirrel’s turn again.

She drove the goats past the tree and called out, "Mother! Come and help me! I have to find food for the goats."

But no one answered. No one came.

"Mother!" the squirrel called again. "Where are you?"

But the squirrel's mother wasn't there.

The squirrel began to cry.

"Oh Mother, Mother," she cried. "You're dead. You're dead! And the leopard killed you."

The squirrel cried all day and her eyes became red. In the evening she drove the goats home again.

"What's the matter, squirrel?" said the leopard. "Why are your eyes red?"

"I met the medicine man today," answered the squirrel. "He gave me some wonderful medicine. I put it in my eyes. With this medicine I will become very big and strong."

"I would like some of that medicine," said the leopard. "Did you get some for me?"

"Why not?" asked the leopard.

"Because it will bring tears to your eyes," said the squirrel.

"Give me the medicine now," said the leopard, and he lay down and opened his eyes.

"Take the stones away!" cried the leopard. "Give me back my eyes!"

"I'll give you back your eyes," said the squirrel, "when you bring back my mother."