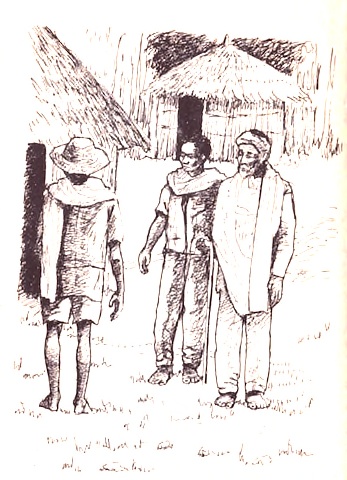 An old man had two sons. One day, he called his sons and said to them, "Listen, my sons. I am an old man and soon I will die. But first, I want to see you in your own homes. Go away now, and build homes for yourselves. Come back to me after a month and show them to me."

The two sons went out of their father's house. The first one took his axe and went to look for trees. He found some tall ones near a road and began to cut them down. Soon he had a good pile of wood and he began to build his house.

The second son went to the house of his friends.

"Make me your brother," he said to his friend. "Let us be friends forever."

The second son left his friend's house and met his brother in the road.

The second brother went to visit another friend.

"Make me your brother, he said. "Let us be friends forever."

Again the second brother met the first brother in the road.

"I have built the roof of my first hut," said the first brother, "and now I am making the second hut."

"And I am making my second home too," the second brother said, and he went to visit his third friend.

A month passed, and the two brothers returned to their father.

He went to the first hut.

"Is anyone there?" he called out. "Visitors have arrived."

"No one is here," the oldest son answered.

They went on to the next hut.

"Is anyone there?" the father called out. "I'm thirsty. I need a drink."

"No one is there," the oldest son answered.

They went on to the third hut.

"Who is there?" called out the old man. "I'm hungry. I want something to eat."

"The hut is empty," his son said. "There's nothing to eat here."

The old man shook his head.

He turned to his second son.

He took his father to the house of his first friend.

"This is my father and this is my brother," he said to his friend.

His friend was very happy. He killed a sheep and made a big feast. They ate and drank happily together.

Then the younger son took his father to the house of his second friend.

"This is my father and this is my brother," he said.

The second friend was very happy too. He killed a goat and made a feast. The old man and his sons stayed there with their friends for a long time. Then they went on to another friend, and another, and another. At last they went home.

The old man smiled at his younger son.

"You have done well," he said. "You have learned an important lesson. A real home is not just a collection of huts. It is a place full of kindness and the love of friends."

Exercises for The Best Home