Before you read the story, think about these questions:

Once upon a time, there was a wise and good king. He had only one son, a boy named Delibis. Prince Delibis was a clever young man and the king loved him very much.

One day, the king called the prince to him and said, "Listen, my son. You will be king after I have died. I want you to be a wise ruler. But you will only be wise if you are happy. And you will only be happy if you marry a good and clever woman. So I want you to travel around my kingdom. Look for the best woman you can find and marry her. Then I am sure you will become a good ruler of our kingdom."

but they were ugly. He couldn't find the perfect girl.

He spent many years travelling. He didn't look like a prince any more. His clothes were old and torn, his shoes were broken.

One day, the tired prince lay down to rest under a tree. It was the middle of the day, and the sun was high in the sky. His food was finished and he was very hungry. He fell asleep.

When he woke up, he saw a girl. She was looking after her father's sheep. Delibis looked at her. She was the most beautiful girl he had ever seen. He  wanted to speak to her, but he couldn't.

"What's the matter?" the girl said. "You look hungry. I have only a little bread with me here, and you can have it if you like." She took out some bread and gave it to Delibis. He ate it hungrily.

The girl started to walk away. Delibis wanted her to stay.

"Have you seen my camel?" he said.

"And this camel had no tail."

"How do you know?" asked the prince.

"And there is a wound on its right side." the girl said.

The prince was very surprised.

"You haven't seen this camel," he said, "but you have described it perfectly. How did you do it?"

"Oh, it was easy," the girl said. "Look at this bush. A camel has been eating the leaves. But it has only eaten from one side of it. This probably means that it's blind in one eye. And do you see this camel dung? It's all together, in one pile. But camels move their tails when they drop their dung. When a camel has a tail, the dung falls in different places."

"But what about the wound on the camel's right side?" asked Delibis. "How did you know about that?"

"Look here, in the sand," said the girl. "A camel has been rolling here. But it has only rolled on its left side. This means that its right side must be wounded."

"I've found the girl I'm looking for at last," the prince said to himself. 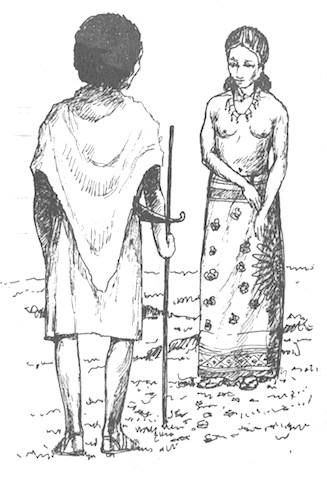 "My name is Hariri," she said.

"And what is your father's name?"

"Where does your family live? Where can I find them?"

"Down there," said Hariri, and she pointed to the village in the distance.

"I'll come back very soon," the prince said, "and speak to your family, but first I must go home. I must tell my father! I've found the girl I want to marry!"

Delibis hurried back to his father's house.

"Father!" he said. "I've found her! She's the wisest and most beautiful girl in your kingdom!"

"That's good, my son. But don't be in a hurry. Find out more about the girl. Meet her family. Talk to them."

So Delibis began the journey back to Hariri's village. On the way, he met Nakrusa, Hariri's father.

"Let's walk together," he said to the old man.

It was a long way to the village. The path was rough and stony and the sun was hot. Nakrusa and Delibis walked together but they didn't speak.

At last, Delibis said, "The journey is too long and we are both tired. Let's make it easier. Why don't you carry me? Or, if you like, I will carry you. Then the time will pass more quickly."

"What a crazy idea!" he thought. "What a stupid young man!"

They walked on and on, but they still didn't speak. After a while, they passed some young men. They were looking after a herd of a hundred cows.

"Old man," said the prince. "Who do these cows belong to?"

"They belong to my cousin," said Nakrusa. "He's a very rich man."

What a strange young man! he thought. He's sorry for a man who has a hundred cows!

A little later, they passed another herd of cattle. There were ten cows and one bull.

"Whose cattle are these?" Delibis asked.

"Oh, they belong to my neighbour," said Nakrusa. "He's only a poor man."

They walked on and on, over the hills, until they came to a valley. There was a field of wheat in the valley. It was already yellow and ready for the harvest.

"Is this wheat free, so that travellers can eat it?" asked Delibis.

"Free?" said Nakrusa. "What do you mean, free? Of course it isn't free! It belongs to the farmer."

"I don't understand this boy at all," he said to himself.

The sun was going down now. It was nearly evening. At last they could see the village in the distance. Some people were coming out of the village. They were carrying the body of a dead man. They were taking him to the cemetery.

"Who has died?" Delibis asked Nekrusa. "Who was this man?"

"He was a good old man," Nekrusa answered. "I knew him well."

"How stupid!" Nekrusa thought. "The poor man is dead. Of course his name dies with him! It won't be used again."

He said nothing. He walked on towards his house and Delibis followed him.

Exercises for The Good Wife Part One