The Bull and his Calf 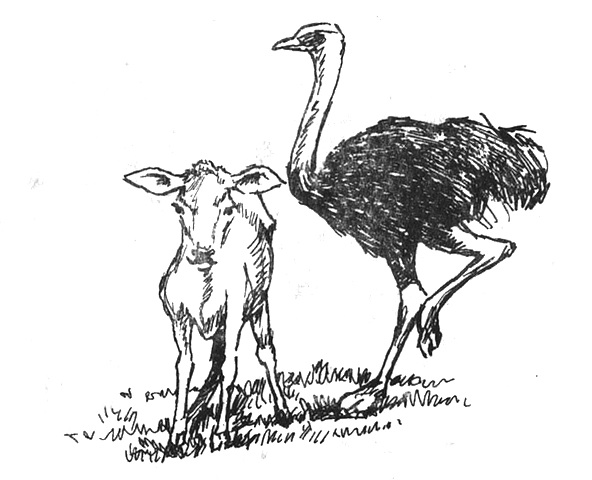 The ostrich and the lion were friends. They lived in one house and were happy together.

The ostrich had a cow, and the lion had a bull. Every day, they went out with the cow and the bull and looked after them.

One day, the lion said to the ostrich, "I don't want to go out today. Please can you take the bull and the cow and go alone? Tomorrow, I'll take them out, and you can stay at home."

At the end of the second day, the lion said, "This is a good idea. Let's take turns every day. One day you'll stay at home, and the next day I will."

They lived happily in this way for a long time.

Then, one day, the lion noticed something.

"It's not fair," he said to himself. "My bull can't have a calf. Now the ostrich will have two animals but I'll only have one."

Day after day, he watched the cow carefully.

One morning, he said to himself, "The calf will be born today."

So he said to the ostrich, "You look tired, ostrich. It's your turn to go out with the animals today, but let me go. You can stay at home and rest."

The ostrich was very pleased.

"Oh, how kind you are, dear lion," he said. "Yes, I am a little tired today. Thank you very much. I'll stay at home today. I'll just rest and sleep. Then I'll feel better in the evening."

So the lion went out with the bull and the cow. In the afternoon, the cow's calf was born. When the evening came, the lion began to walk home with his bull, the cow and the calf. On the way, he found a nice new grindstone.

"That's lucky," he thought, and he picked it up.

The ostrich was waiting for him.

And he gave the grindstone to the ostrich. The ostrich was very angry.

"That's impossible!" he said. "A bull can't give birth to a calf! Only a cow can do that. I don't want this grindstone. I want my calf. Give it to me."

They argued for a long time. At last, the lion said, "We'll never agree. Let's call all the animals together. We'll ask them to decide. One of us is right and the other is wrong. Let them choose."

So the lion called all the animals together.

"Listen," he said. "Something wonderful happened today. My bull gave birth to a calf."

"It's not true!" shouted the ostrich. "The calf is mine! My cow gave birth to it!"

"The lion's right," they all said. "The calf belongs to him."

And they began to go home.

"Stop! Wait!" the ostrich said. "Where's the fox? He's a very clever animal. We must ask him."

He ran away, and found the fox. The fox listened to the ostrich's story.

So the ostrich went back to the other animals.

"Wait," he said. "The fox is coming. He's in a hurry. Look, there he is. Fox! Fox! Please stop and listen! Does the calf belong to the lion, or does it belong to me?"

All the animals began to laugh.

"That's impossible!" the lion said. "Your father can't give birth. Only your mother can do that."

"It's impossible, is it?" the fox said. "Why? Your bull gave birth to a calf. Why can't my father give birth to a baby fox?"

The lion was angry because the animals were all laughing at him. He ran after the fox and he didn't come back. The ostrich was happy. He took his cow and his calf and went home.

Exercises for The Bull and his Calf