How the Dog Lost her Voice 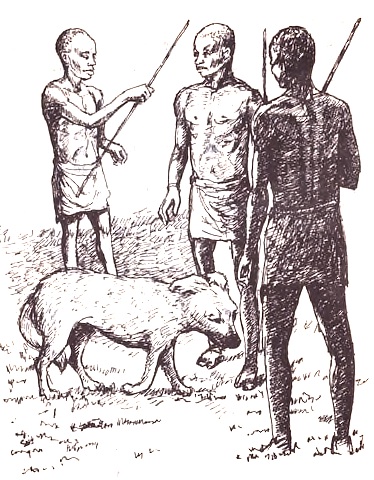 Long ago, when the world was young, the dog was the friend of man. In those days, the dog could speak. She lived with men and talked with them.

One day, the dog quarrelled with the men. They could not agree with her.

"We must find a wise man," said the dog. "He can decide who is right."

The men began to leave the sky.

"I like it here, beside this beautiful thing," said the dog. "I can run fast. I'll follow you later."

So the men went back to the earth.

After the last man left, the dog picked up a burning branch from the fire with her tail. She ran after the men, carrying the fire, and that is how fire came down to earth.

Some time later, the dog went out hunting with the men. On the way, they met a lion. They were afraid when they saw the lion.

"This animal eats other animals," they said. "Perhaps it will eat us."

So they ran away from the lion.

At last, they caught a buffalo. They killed it, skinned it and began to cut up the meat.

"Wait," one of the men said. "Before we can eat this meat, we must give some to the spirits."

"But the spirits live far away," another man said.

"Our friend, the dog, can run fast," said a third man. "She can take some meat to the spirits."

So the men put a piece of the best fat meat into the dog's mouth.

"Go to the spirits," they said. "Give them this meat. Then we can begin to eat."

The dog began to run. She ran and ran. She was hot and tired. She wanted to let her tongue hang out of her mouth but she couldn't because of the meat. So she stopped to rest and put the meat down on the ground. Some of the juice from the meat ran down her throat. It was delicious.

“This meat is delicious,” thought the dog, “and I'm very hungry, but it's a gift for the spirits. I mustn't eat it.”

She picked the meat up and ran on. Soon she was hot and tired again. She stopped to rest. Again, some of the juice from the meat ran down her throat.

“I'll just eat a little bit,” she thought. But after the first little piece, she took another, then another and soon the meat was all gone.

Slowly, the dog went back to the men.

"Dog," they said, "have you taken the meat to the spirits?"

The dog said nothing. She put her tail between her legs, and put her ears back, and howled.

"What's the matter with her?" the men said to each other. "Perhaps she's tired. Did she take the meat to the spirits? Perhaps she didn't."

But they took the buffalo meat anyway, and roasted it on the fire from the sky.

But the dog didn't answer. And after that day, she never spoke again. The spirits had taken her voice away from her, because she had eaten their meat.

Exercises for How the Dog Lost her Voice