A dikdik is a small antelope. 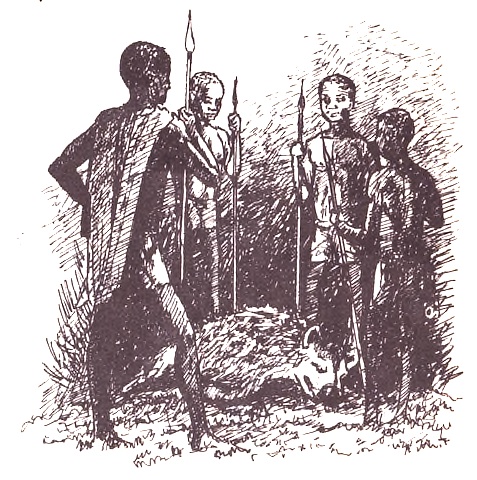 Gany-Nyang and his sons went into the forest to hunt. They hunted all day, from early in the morning until late in the evening, but they didn't find any animals at all. They were very hungry.

At last, they heard the noise of an animal, and one of Gany-Nyang's sons shot at it and killed it. They were happy now. They had meat to eat.

"What kind of animal is it?" they asked their brother. "Is it a bushbuck? Or a dikdik? Come on, let's cut it up and cook it."

But their brother looked unhappy.

Gany-Nyang and his sons looked at each other.

"What shall we do?" they said. "We are Nuer, and the Nuer don't eat hyenas. We can't change our custom. But we must eat, or we'll die."

They began to argue.

"Let's eat the hyena," some of them said.

Gany-Nyang was not arguing with his sons. He was looking at the hyena. At last he said, "Listen to me, my sons. Cut off the hyena's head and throw it away."

The sons did so. Gany-Nyang looked at the hyena again.

"Now cut off the legs and throw them away," he said.

The sons did so.

His sons cut off the tail.

"Look at this animal now," said Gany-Nyang. "Does it look like a hyena to you?"

"Well then," said Gany-Nyang, "if it's a bushbuck, we can eat it. Come on, boys. What are you waiting for?"

So Gany-Nyang's sons skinned the hyena and cooked it and ate it.

Exercises for Gany-Nyang and the Hyena