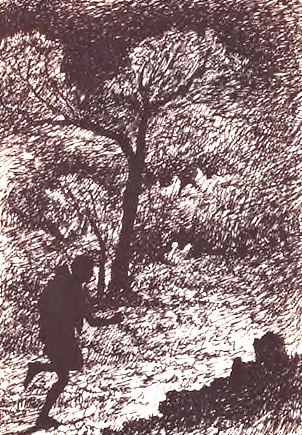 He called the animals and the man to one place, and spoke to them.

"Tomorrow I'm going to give you your gifts," he said. "Look for the morning star. When you see it, come to me. Listen for the cock. When he crows, come to me."

So the man and the animals went away.

The dog was hiding in the trees. He heard God's words. Quickly, he ran to the man.

So very early the next morning, the man woke up. He put the skin of an animal on his back and he ran on his hands and feet to God.

And God gave the man a spear.

"Are you happy now?" he said to the man.

So God gave the man all the spears and the man ran away.

A little later, the buffalo came.

"Then who was it who came earlier?" said God.

"It was the man," said the buffalo. "The foster child of the dog."

"You're late!" said God. "Why didn't you come earlier? I gave the man the spear because he came first. For you there are only horns."

So God gave horns to the buffalo and to all the cattle, and to the lion and leopard he gave claws, and strong noses, so that they could smell their enemies. But the man became the master of all the animals, because he had all the spears.

Exercises for The First Gift