Before you read the story, what do you think will happen next? 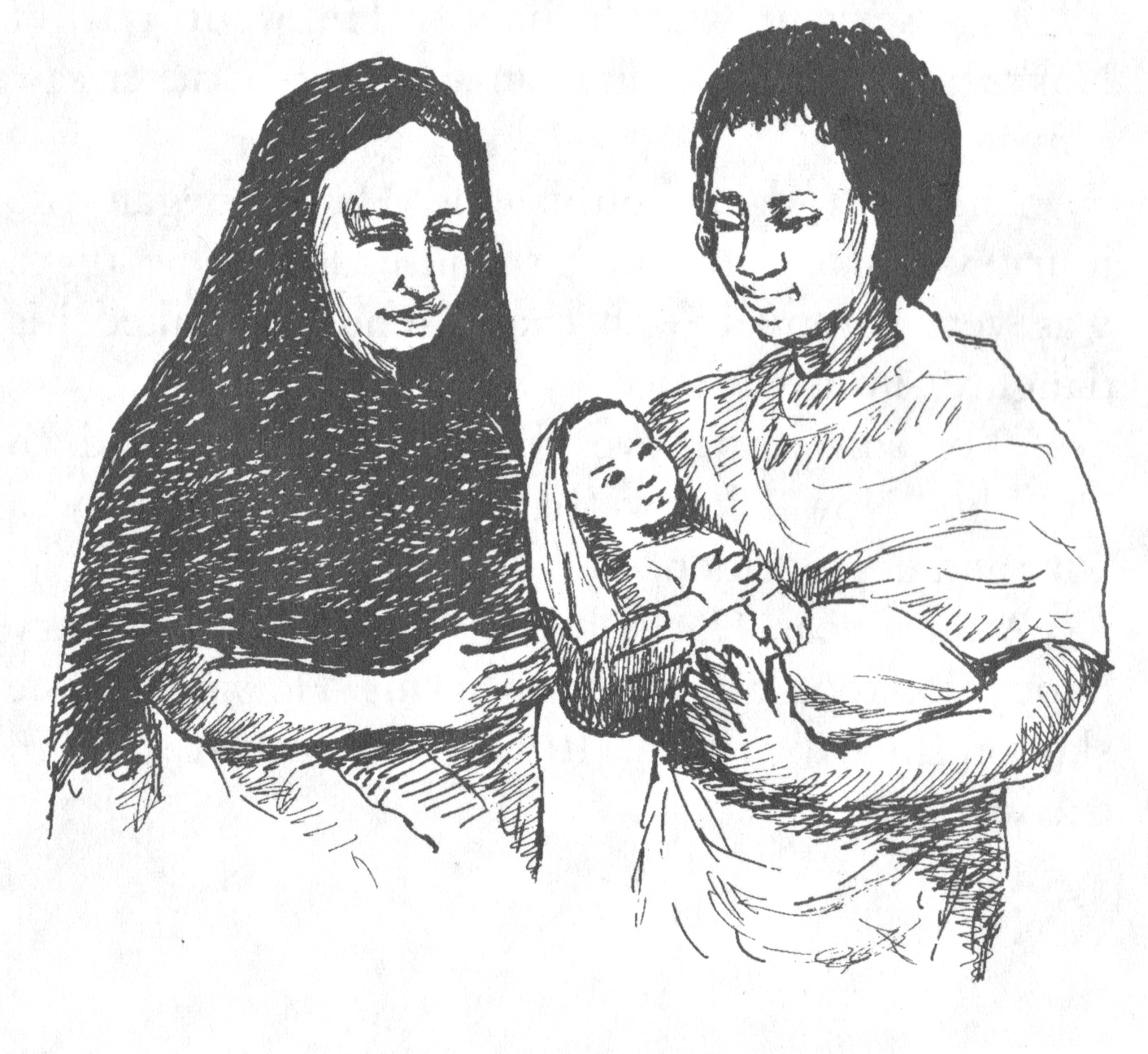 The wedding was a happy one. Everyone ate and sang and danced. Only Delibis's servant wasn't happy. He went out of Nakrusa's compound and ran away. They never saw him again.

The next day, Delibis and Hariri began the journey back to the king's house. Everyone there was very happy to see them. The king liked his daughter-in-law at once.

"My son, you have chosen well," he said to Delibis. "Now I know that one day you will be a wise and happy ruler."

After a year, Hariri had a son. Delibis was very happy. He took his son in his arms. He smelled the skin on the baby's neck. It was the sweetest smell in the world for him.

Hariri smiled at him.

"I'm always frightened when you go out at night," Hariri said. "There are bad men in the town and the wadi is the most dangerous place. Please don't go to the wadi in the evening, when the people and the animals have returned to the town. Promise me."

And so Delibis and Hariri lived happily for many years. They had seven sons and seven daughters. The old king died, and Delibis became king. He was a wise and good ruler.

The years passed. One day, when Delibis and Hariri were old, a servant came to Delibis.

"The camels have returned from the wadi," he said, "but one of them is lost."

Delibis forgot his promise to Hariri.

It was dark outside. There was only a half moon in the sky. Everything was quiet. There was nobody at the wadi now. Everyone was at home in their own houses.

Suddenly, four men jumped out from behind a tree.

"Give us your money!" shouted one.

"Give us your clothes!" shouted another.

The third man came close to Delibis and looked at his face.

But the first two robbers laughed.

"Let him go?" they said. "Are you crazy? He'll send his soldiers after us. They'll catch us and kill us. No, we must kill him now."

They began to argue with each other.

"Let him go!" said the others.

The first two robbers were the strongest.

"We must kill you," they said to the king. "We want to save our own lives."

"Give me one last wish before I die," the king said.

"Go to my house," Delibis asked them. "Tell my wife that you saw me near the wadi. Say to her, ‘There's a black cow in my herd of cattle. Its horns are too long. It will put out the eyes of the other cows. Take it out of the herd.’"

"Is that all?" asked the third robber.

"No," answered the king. "Tell her this: ‘There's a black mat on the roof of my house. Take it away. Put a white mat there in its place.’"

"Is there anything else?" said the fourth robber.

"Yes," Delibis answered. "I have four camels. Tell my wife to keep two of them. But tell her to let two of them go."

"Have you finished now?" the first robber said.

"Then you must die," the first robber said.

And so the robbers killed Delibis. They took his body and threw it under a tree.

"Come on," the first two robbers said. "We must run away."

"No," said the third and fourth robbers. "We must take the king's message to his wife. We promised."

"Are you crazy?" the first robber said. "She'll know that we killed him. Her sons will kill us."

So the four robbers went to Delibis's house. They asked to see the queen. She was talking with her seven sons. They were all carrying spears.

The first robber walked boldly up to the queen.

"I have a message for you," he said, "from your husband, the king."

"Where did you meet him?" Hariri asked.

"At the wadi," the robber answered.

The queen put her hand over her mouth. Her eyes opened wide and she looked at the robbers. Her sons moved towards her.

"Is my husband well?" she asked.

"He's fine," laughed the robber. "We left him under a tree. He'll be home soon."

"And what was his message?" Hariri asked.

The first robber told her the words of the king.

When he finished, Hariri said to her sons, "Catch these men!"

"Why?" her eldest son asked. "They have only brought some messages from our father."

The robbers were already running out of the compound.

Her seven sons ran after the robbers and caught them. They brought them back to the queen. She was crying.

"Didn't you understand your father's message?" said Hariri. "Listen, this is what it means. 'Take the black cow out of the herd of cattle,' he said. 'It will put out the eyes of the other cows.' This means that your father doesn't want the crows to eat his eyes. He wants us to bury his body."

"You mean our father's dead?" her sons asked.

"Yes," said Hariri. "This is his second message. 'Take away the black mat on the roof. Put a white one there.' He is dead and he wants me to put white clothes on for him."

"It was these men who killed my father!" shouted one of the sons, and all of them lifted their spears.

"Wait!" said Hariri. "There was one more message. 'Keep two of my camels,' your father said, 'but let two of them go.' This means that two of these men killed him, but two tried to save his life."

The robbers fell down on to the ground.

"You know everything!" the first robber said. "You're right. It was my friend and I who killed the king. These two men tried to save him."

"Kill the murderers!" shouted the brothers, and they killed the first two robbers with their spears and daggers.

Then the third and fourth robbers took Hariri and her sons to the wadi. They found the body of Delibis and brought him home. Hariri put on white clothes and her sons buried their father.

"He was a great king," all the people said. "Why? Because he was married to a good and clever woman."