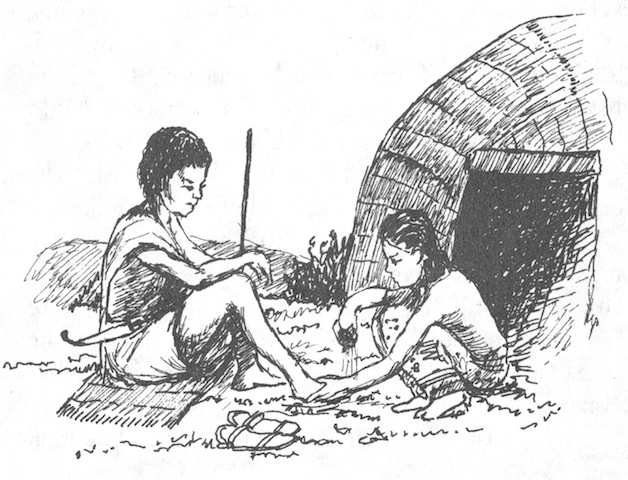 The prince and Nakrusa came to Nakrusa's hut. The old man turned round to Delibis. He wanted to say goodbye. But the prince had already followed him into his compound.

Nakrusa was tired of Delibis. He wanted him to go away. But now the young man was his guest. He had to welcome him. So he went into his hut and brought out a mat. He put it on the ground and Delibis sat down on it.

Hariri was inside the hut. She was cooking the evening meal.

"Listen, daughter," Nakrusa said to her. "We have a very strange guest. A crazy young man has followed me all day. He's come to the village with me and now he's here in my compound. Take him some water so that he can wash his feet."

So Hariri took some water and went out to wash Delibis's feet. He was very happy when he saw her. She smiled at him, and his heart jumped. She was even more beautiful than before.

"Why don't you put your feet on the mat?" she asked him. "Look. They're on the dirty ground."

"But my feet are still dirty," Delibis answered. "You haven't washed them yet. If I put them on the mat now, the mat will get dirty too."

So Hariri washed his feet. When they were clean, he put them on the mat.

Hariri went back into the hut to find her father.

"This young man isn't crazy at all," she said.

"But father," Hariri said. "You don't understand. He meant that the journey was long and boring. He wanted to make it interesting. When he said, 'Why don't you carry me?' he meant, 'Why don't you tell me a story?' And when he said, 'Or if you like, I'll carry you,' he meant, 'Or, if you like, I'll tell you a story.' In that way, you could help each other along the road."

"Well, anyway," said Nakrusa. "That wasn't the only thing. We passed a big herd of a hundred cows. 'Who do these cows belong to?' he asked me. 'He must be a poor man.' Poor? A man with a hundred cows is rich! Then later, we passed a small herd of ten cows and one bull. 'Who do these belong to?' he said. 'Oh, he must be a rich man.' Now, isn't that crazy?"

"No, father," Hariri said. "He's right. The man with a hundred cows is rich now, but he won't be rich for long. If he doesn't have a bull, his cows will never give birth to calves. After a while they will all die and he'll be poor again. But the man who has a bull as well as ten cows will soon be rich. His cows will all have calves. He'll have more and more cattle every year."

"You haven't heard it all," Nakrusa said. “We passed a field of wheat. 'Is this wheat free, so that travellers can eat it?' this stupid boy asked me."

"But father," said Hariri. "Who is the farmer? Is he a generous man? Does he give food to the guests and travellers who come to his hut?"

"And does he ask them to pay for their food?" asked Hariri.

"Of course he doesn't!" Nakrusa answered. "What kind of man asks his guests to pay for their food?"

"Then the young man was right," Hariri said. "The wheat is free. Travellers can eat it without paying."

"Well, perhaps," Nakrusa said. "But listen to this. While we were coming into the village, we passed a funeral. A crowd of people were taking a dead man to the cemetery. And do you know what this poor fool said? 'Will his name be buried with him, or will it be used again?'"

"Oh," said Hariri, "that's easy to understand. He was asking you if the man had a son. The father's name lives on in his son. It's not buried with him. It's used again and again."

Nakrusa was tired of talking to his daughter. He went to talk to her uncles. 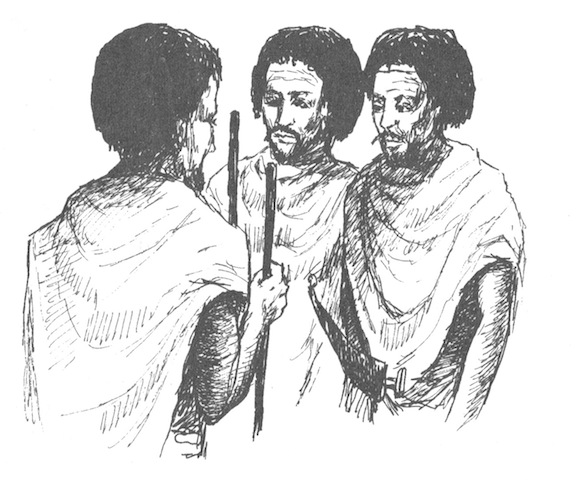 "My daughter's crazy," he said. "You have seen that strange young man sitting outside my hut. He asks all kinds of stupid questions. But my daughter likes him!"

"Does she?" said Hariri's uncles. "That's good. Your daughter isn't a child now. She must get married soon. Why don't you let her marry  him?  He looks like a good man to us."

"Oh, very well," said Nakrusa. "But it's all so strange. I can't understand it at all! They're both crazy!"

Hariri heard her uncles and her father. She was very happy.

"He's so handsome," she said to herself, "and so clever. He's the best young man I've ever seen."

Delibis was still sitting outside the hut on the mat. He heard Hariri's words. He was very, very happy.