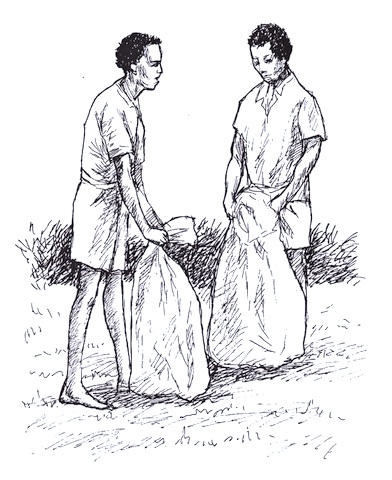 "It's difficult for me in this town now," thought Hirsi. "Everyone watches me. I can't cheat anyone. I can't steal anything. I'll go to Kabaalaf's town. No one will know me there."

On the very same day, Kabaalaf was thinking too.

"People know me here, in this town," he thought. "I can't get anything from anyone here. I'll go to Hirsi's town. They don't know me there."

They met on the road.

"Hirsi! My friend! How are you? Are you well?" said Kabaalaf.

"Really?" said Hirsi. "And what are you going to sell?"

"A sack full of the best coffee," said Kabaalaf, and he pointed to his sack full of goat dung. "And you? What are you going to sell?"

"Oh, the finest flour," said Hirsi, and he lifted up his sack full of ashes.

"Flour?" said Kabaalaf. "That's wonderful. I want to buy flour in the market."

"Do you?' said Hirsi. "Really? And I want to buy coffee in the market!"

"I've got a good idea," said Kabaalaf. "Let's exchange our sacks. You can give me your sack of flour, and I'll give you my sack of coffee. Then we can both go home."

So Hirsi gave Kabaalaf his sack of ashes, and Kabaalaf gave Hirsi his sack of goat dung, and they both went home.

Hirsi arrived at his house and opened his bag of coffee. Inside, there was only goat dung.

"Oh! That wicked Kabaalaf! He cheated me!" he shouted.

Kabaalaf arrived at his house and opened his bag of flour. Inside, there were only ashes.

"The thieves have cheated each other," everyone said.

Exercises for Hirsi and Kabaalaf