The Merchant and the King

This is a very beautiful and ancient story, with a deep meaning. Just read it and enjoy it! 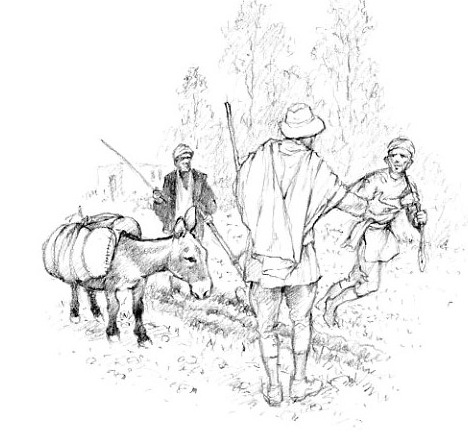 Once there was a merchant. Every year, he left home and travelled through the whole land of Ethiopia. He bought goods and sold them again; then he went home with his money.

One day, the merchant was travelling along a road in Sidama. A crowd of people was standing near the road. They were looking at a field.

The merchant stopped, and looked at the field too.

A farmer was ploughing the field, but he was not using an ox. A man was pulling the plough. The plough was tied to his back, and the farmer was beating him with a stick.

"Go on! Pull!" the farmer was shouting. "You lazy man! Pull my plough!"

"How sad," thought the merchant. "This unhappy man is not an animal. He is a man!"

Tears came into his eyes.

The poor man looked up and saw him.

"Everything changes," he said. "Nothing stays the same. My sad life will change too. I will not pull this plough for ever."

The merchant shook his head, and went on down the road.

The next year he came to Sidama again. As he was travelling past the field, he remembered the man tied to the plough. He stopped in the town and talked to a woman in the street.

"Last year," he said, "I came this way. I saw a poor man. He was in a field, pulling a plough, and the farmer was beating him. Where is that man now? Did he die?"

"Oh no," the woman said. "He didn't die. God looked down from Heaven and was sorry for him. He gave the man money and power. That man is now our king."

The merchant was very surprised.

"Go to the palace then," the woman said. "You'll find him there."

So the merchant went to the palace. He stood inside the gate with a crowd of people, and waited. At last, the king came out of the palace.

"Is it him? Is it the same man?" the merchant thought. "Yes! It is! He's rich and powerful now. This is wonderful!"

And the merchant began to laugh.

The king heard him.

"Who is that man?" he asked his servants. "Bring him to me."

The servants brought the merchant to the king.

"Who are you?" the king asked him. "Why are you laughing?"

"I am a merchant," the merchant answered. "Last year, I came to Sidama. I saw you. You were tied to a plough. You were pulling it, and the farmer was beating you. I was very sad, and tears came to my eyes. Now I am here again. I asked for news of you. 'That man is now our king,' they told me. So I came here to see you. God has blessed you, and I am very happy for you."

"I remember you," the king said. "Come and sit beside me, my friend. Let us eat and drink, and be happy together. But I told you something last year. Do you remember my words? Everything changes. Nothing stays the same. This happy life will change too, and I will not be a king forever."

The merchant and the king ate and drank together, and talked for a long time. Then the king gave the merchant gold and money, and the merchant went on down the road.

The next year, the merchant came to Sidama again. He was happy.

"I will see my friend, the king," he thought, and he hurried to the palace. He went in through the gates and waited. At last, the king came out of the palace.

"But I don't know this man," thought the merchant. "Who is he? And where is my friend?"

A man was standing next to the merchant.

"I was here last year," the merchant said to him, "and this man was not the king. Where is the old king now?"

The merchant was very sad when he heard this.

So the merchant went with the man to the old king's grave, and he read the words on the gravestone.

"Everything changes," they said. "Nothing stays the same. This grave stone will not be here for ever."

Sadly, the merchant went on, down the road.

Five years later, he came back to Sidama.

"I must visit my old friend's grave," he thought.

But he could not find the grave, or the gravestone. He stopped a boy in the street.

"Oh," said the boy. "Didn't you know? We have a new town plan now. Our city is growing bigger and bigger. The old things must go. Do you see that modern building? It's the tallest in our city. It's fifteen storeys high. The king's grave was in that place. The builders broke it up, and threw the stones away."

The merchant was very sad when he heard this. He went up to the big modern building, and looked at it. It was made of concrete, glass and steel. And over the door some words were written.

"Everything changes," they said. "Nothing stays the same. This building will not be here for ever."

"You were right, my friend," the merchant said, and he went on, down the road.

Exercises for The Merchant and the King