The Bear and the Woman 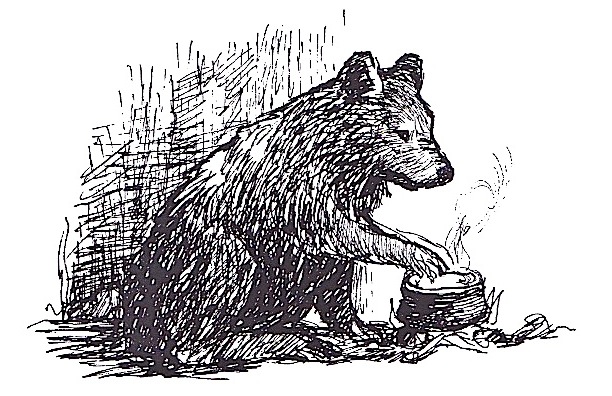 A long time ago, the first bear and the first woman were friends. They were good neighbours and they helped each other.

One day, the woman was cooking in her house. She was making porridge.

"This porridge will be good," she thought. "I am glad, because I am very hungry. But I need more water. I will go to the river and get some. I must be quick. I don't want my porridge to burn."

She picked up her empty water pot and ran out of her house. The bear was standing outside.

"Where are you going?" asked the bear. "Why are you running?"

"I'm going to the river to get some water," said the woman, "but my porridge is cooking. I don't want it to burn."

"You are cooking porridge?" said the bear. "I like porridge."

"I'm sorry," the woman said. "I have only a little bit of porridge, and I am very hungry. I can't give any to you."

"Not even a little bit?" said the bear.

"No," said the woman. "Please, bear, don't go into my house and eat my porridge. Please leave it for me."

Then she hurried to the river.

The bear could smell the porridge. He began to feel very hungry.

He looked inside the pot.

He ate a little bit of the porridge. It was delicious! He ate a bit more, and a bit more. Soon, nearly all the porridge was gone.

The woman came back from the river. She saw the bear. He was eating the last bit of porridge.

"Bear! What are you doing? You are eating all my porridge!" shouted the woman.

She picked up a big stick, and hit the bear on the head. The bear was frightened of the woman. She was big and strong, and she was very angry. Quickly, he ran out of the house.

Outside the house was the woman's donkey. He was tied to a tree with a rope. The donkey saw the bear. It was running towards him.

"Help!" thought the donkey. "The bear's going to eat me!"

He pulled and pulled at his rope. It broke, and he ran away. 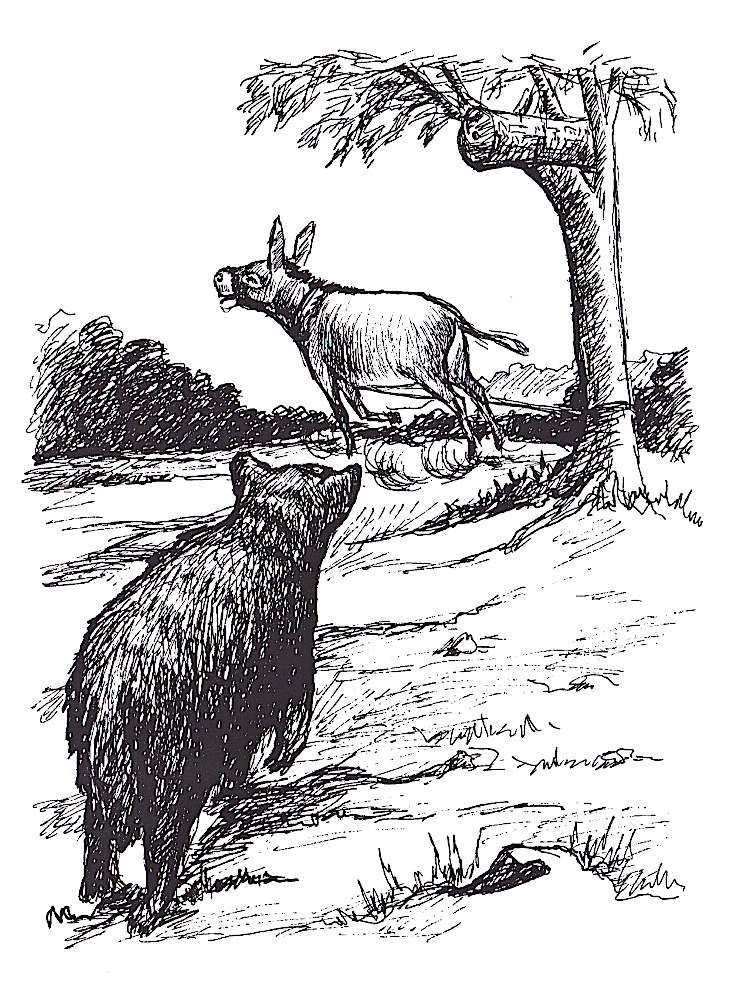 "What's this?" said the bees. "Someone is attacking us!"

And they all flew out of the beehive.

Near the woman's house, was the house of the chief. And outside the chief's house was a chicken. The bees flew up to the chicken, and stung her.

And she flapped her wings.

On the ground outside the chief's house were some cereals. They were drying in the sun. The chicken's wings made a wind and the wind blew the cereals away.

The chief's dog began to bark and his wife ran out of the house.

"Oh! Oh! My cereals, are blowing way!" she shouted. "You stupid chicken, what are you doing? Why are you flapping your wings?"

"It's not my fault," said the chicken. "The bees stung me. That's why I flapped my wings."

The chief's wife went to the bees.

"Why did you sting the chicken?" she asked.

"It's not our fault," said the bees. "The donkey shook the tree, and our beehive fell down to the ground. We were angry. That's why we stung the chicken."

So the chief's wife went to the donkey.

"Why did you shake the tree?" she asked.

"It's not my fault," said the donkey. "The bear ran towards me and I was frightened. I pulled my rope. That's why I shook the tree."

The chief's wife ran after the bear.

"Why did you frighten the donkey?" she asked him.

"It's not my fault," said the bear. "The woman hit me on the head with a stick. I was running away from her. That's why I frightened the donkey."

The chief's wife went to the woman.

"Why did you hit the bear with your stick?" she asked.

"It's not my fault," said the woman. "The bear came into my house and ate all my porridge. And I am still very hungry."

So everyone went to see the chief. He listened carefully.

"The bear is greedy," he said at last. "He likes to eat other people's food. And the woman is selfish. She does not like to share her food with him. They cannot live together. The bear must go away."

So the bear went away to live in the forest. He did not want to go. He was angry with the woman.

The bear still lives in the forest, and he is still angry. The woman knows this. She is frightened of the bear.

"If he catches me, he will eat me," she thinks, and she is always very careful.

Exercises for The Bear and the Woman