At the beginning of this story, the sheep and the goat went off to find some good grass to eat. On the way they met some other animals.

The sheep and the goat enjoyed the clean water and the good grass. Then they wanted to go home.

The lion, the leopard and the hyena met under the tree.

B. Where were they?

Fill the gaps in these sentences with words from the list below to show where the animals were.

Fill the gaps in these sentences which retell the story. Choose the right word from the list below to show what the animals were feeling.

"Out of the frying pan into the fire" is an English saying. It means that if you try to run away from one problem, you might be in worse danger. In this story, the "frying pan" for the sheep and the goat is their life with the cruel farmer. They are always hungry, and so they try to run away. But when they go out from the farm, they meet dangerous enemies (the "fire") who want to eat them.

Do you have any sayings like this one in your language 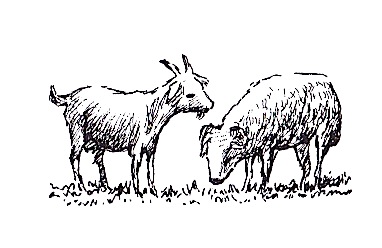