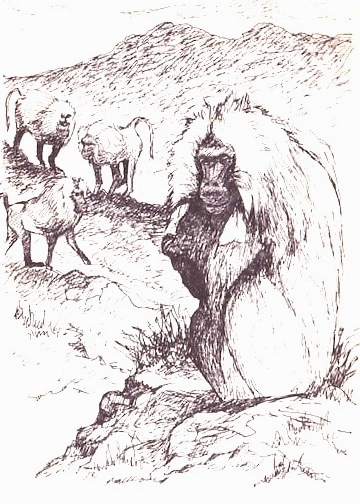 Once there was a troop of baboons. They lived peacefully together. They went out every day to look for food and slept at night on some big rocks.

But one day, the biggest baboon decided to become their chief. He was a big, dangerous animal.

"You must all obey me!" he said in a loud voice. "I'm the cleverest. I'm the strongest. I'm the greatest of you all!"

Some of the other baboons tried to fight the baboon chief but they were not strong enough or clever enough. The chief was too strong for them. He pulled their tails. He beat them and bit them. Soon all the baboons obeyed him. They were frightened of him.

The baboon chief was happy now.

"Who is the most important baboon around here?" he asked.

"You are, sir. You are," all the others answered.

The baboon chief was the strongest baboon, but he was not the only big one. There were some other big baboons in the troop.

"Sir," one old baboon said to him. "We all want to obey you. We all want to follow you, but we don't always recognise you. It's easy for us to follow the wrong baboon. Please wear something on your head. Then we will always know that you are our great and wonderful chief."

"You stupid animals," the baboon chief said. "Don't you know your own leader?"

"We are not clever like you, sir," he said. "And anyway, you are our king. A king wears a crown on his head. Look, we’ve found this beautiful scarf. Please wear it for us."

"All right," he said. "I'll wear your scarf. But listen, all of you. I'm not happy with you. I'm not happy at all. You're not good baboons. You don't come quickly when I call. You don't bring me the best food. You don't follow me. But things are going to change! Do you want me to fight you? Do you want me to pull your tails and bite you and beat you? Then you must obey me! When I do something, you must do it too. When I say something, you must say it too! Do you understand?"

The other baboons looked at him. His teeth were long and sharp. He was very clever and strong. They were frightened of him.

"Good," said the chief. "Then tie the scarf round my head."

After a while, the baboon chief woke up. He had a headache. The scarf on his head was tight.

"It's killing me! Help me!" cried the baboon chief.

"It's killing me! Help me!" cried the other baboons.

That was the end of a great tyrant.

Exercises for The Baboon Chief