The Man from the River 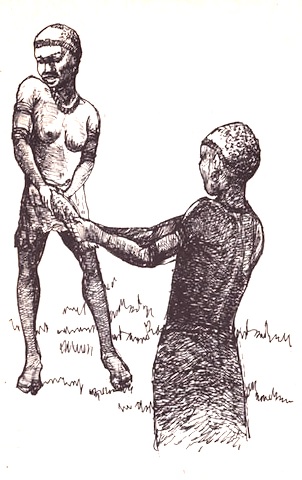 One day, Achala and Ajulo went to the river. They wanted to catch some fish with their spears. A big fish swam past them. Achala speared it, but Ajulo pulled it out of the river.

They began to fight.

A man was hiding in a dead tree by the river. His head was covered with leaves, and he was catching fish with his harpoon.

"Don't quarrel," he called to the two girls. "Listen to me."

Achala and Ajulo were very surprised. They saw a man in the tree but they didn't see his face, because his head was covered with leaves. They began to pull at the fish again.

"Stop!" the man called out.

The girls looked round again. They couldn't see anyone.

"Who speared the fish?" the man called.

So Ajulo dropped the fish's head, but Achala could not hold the fish by the tail. It fell into the river and the water carried it away.

"Then catch another fish," said the man. "You must work for your food."

The girls went home and spoke to everyone in their village.

"We were quarrelling over a fish," they said, "and a strange voice called to us. A man judged our quarrel, but we didn't see him."

The next day, Achala and Ajulo went fishing again. This time, Ajulo speared a fish, but Achala took it out of the river. They began quarrelling again.

"But I took it out of the river," Achala said.

The man was hiding in the tree by the river again. 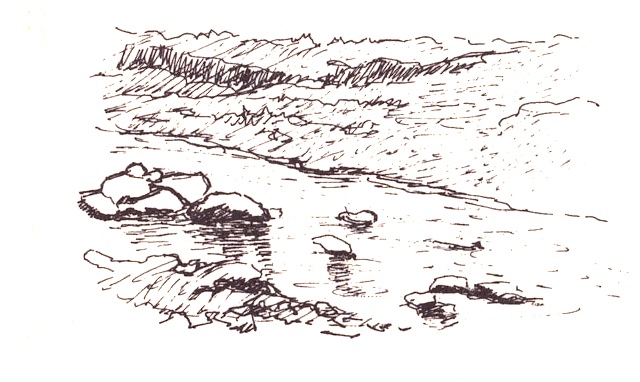 "Don't quarrel!" he called to the two girls. "Listen to me."

The girls looked round, but they couldn't see anyone.

"Who speared the fish?" the man said.

"Then the fish is yours," said the man.

So Achala dropped the fish's tail. But Ajulo was holding the fish's head and she didn't drop it.

"Catch some more fish," said the man. "You must work for your food."

The two girls went back to their village.

"The strange man spoke to us again today," they said. "He judged our quarrel but we didn't see him."

The next day, the chief told everyone in the village to go down to the river to look for the strange man. After a while, they heard his voice.

"It's coming from the river bank," one person said.

"No, it's coming from behind that rock," said another.

Everyone looked up, and saw the man. They climbed up and pulled him down out of the tree.

"Let's take him to our village," they said.

So two men held on to the stranger's arms, and they all began to walk towards the village.

It was true. The man was not there now. In his place was a black bull.

It was true. The bull was white now.

The white bull tried to run away, but the men held him. He couldn't escape.

Then they felt something strange in their hands. The bull was changing again. He wasn't a bull now, he was a bush, with leaves and branches and fruits. Then, suddenly, the bush was not there. A beautiful woman was in its place.

At last they reached the village and the stranger changed into a man again. The people gave him food, but he refused to eat.

"He came from the river," they said. "Let's give him water to drink," so the chief's daughter brought him a gourd of water.

"Where's the mat to cover the water, and where's the stand for the gourd?" the man said. "I can't drink from an uncovered gourd."

So the chief's daughter brought him a mat to cover the water, and a stand for the gourd, and the stranger drank the water.

The people said to the chief's daughter, "He has drunk your water, so you must take him into your hut."

So the stranger stayed with the chief's daughter.

When the morning came, the stranger was not there.

"Where is he?" everyone said. "Why didn't he speak to us before he went?"

The chief's daughter came out of her hut with something in her hand. It was a necklace made of cowries. She showed it to her father.

"The stranger left this under my cowskin," she said.

The chief was angry.

"He took you but he didn't pay for you," he said. "All he has given me is this necklace."

Nine months later, the girl had a son. No one knew the father's name so they called the boy Ony-ya, 'the son of the stranger'. Ony-ya ate and ate. He grew fast. He became very tall and strong. He became the king of the Anuak people.

And from that time to this, the king of the Anuak wears the necklace of cowrie shells when he is crowned. He takes the name of his mother, but the people call him, Ony-ya, 'the one who comes from the river'.

Exercises for the Man from the River