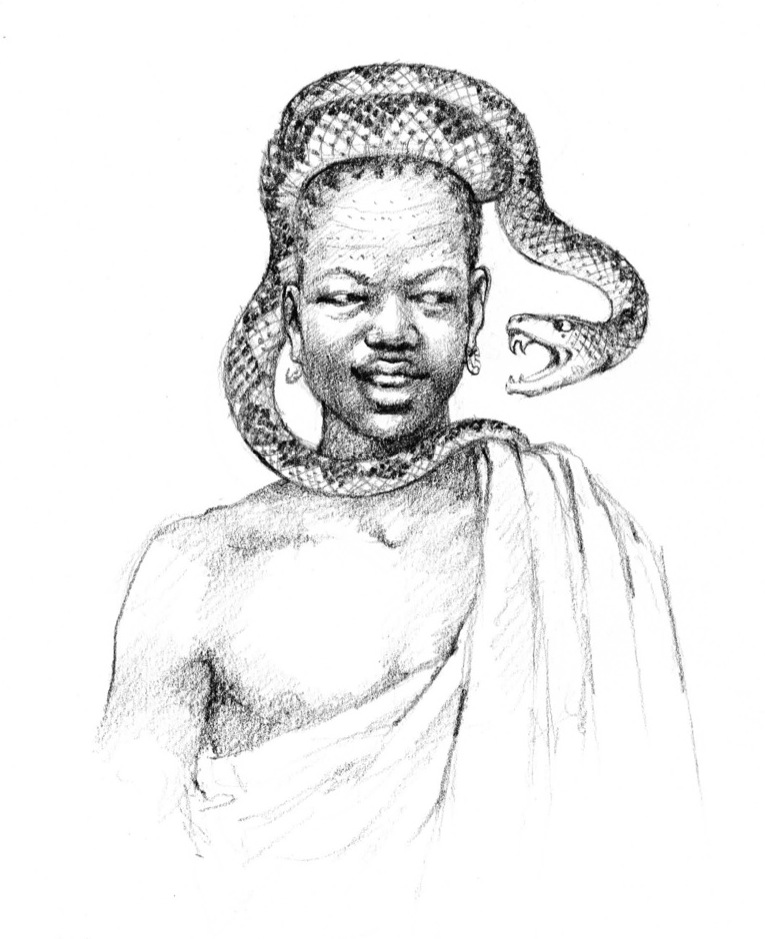 One day, a man was going on a journey. On the road he met a snake. The snake looked up at the man and said to him, "You are lucky, my brother. You have legs, and it is easy for you to walk. You can go fast along the road. But I don't have legs. I can only lie on the ground and crawl on my stomach. The stones hurt me, and I am very tired."

The man was sorry for the snake.

So the man picked up the snake and put him on his head. He walked a long way with the snake on his head, but at last he was tired.

"Please," he said to the snake. "Get off my head now. I have carried you a long way. I'm tired, and I can't carry you any more."

The snake was angry.

The snake's head was near the man's face. The man could see the snake's small angry eyes, and the snake's long tongue. He was frightened.

"No!" he said. "Please don't bite me. Let's go and find a judge. We will tell him about our quarrel. He can decide between us, and give us his judgment."

The snake agreed, and they went to find a judge. First, they met an elephant.

"The snake was tired and I wanted to help him," said the man. "I put him on my head, and I carried him for a long time. But the snake didn’t thank me for it. He is ungrateful. I want to put him down, but he wants to stay on my head. If I take him off, he will bite me. Am I right, or is the snake right?"

The elephant looked at the snake.

"I know this animal," he thought. "His bite is very poisonous. It could kill even me, an elephant. But the man is small and weak. He cannot hurt me."

"The snake is right," the elephant said at last. "He did not ask for help. You invited him to sit on your head. You cannot ask him to go. Let the snake stay."

The snake was happy.

"Let's ask another animal," the man said. "The elephant is foolish. Look, here is the lion. Let's ask him."

So the man and the snake told their story to the lion. The lion listened carefully.

"The snake is very dangerous," he thought. "I don't want to be his enemy. He will come and bite me when I am asleep. But the man is small and weak. I am not afraid of him."

"The snake is right," the lion said. "Let him stay on your head."

"Now," the snake said to the man. "Is that enough for you? Do you agree with me now?"

So the man and the snake told their story to the leopard, and to the hyena, to the baboon and to the buffalo. All of them were frightened of the snake.

"We have asked all the animals now," said the snake, "and they all agree with me."

He was very happy.

"But there is one more animal," the man said. "We haven’t asked the fox. Look, here he comes."

The fox was running through the forest towards them.

"Fox!" cried the man. "Stop! Please listen to us. We have quarrelled, and we want you to give your judgment."

"Why have you quarrelled?" asked the fox.

"I was sorry for the snake," said the man. "I picked him up and carried him on my head. I walked for a long way. I’m tired now, and I want to rest. But this ungrateful animal refuses to come down."

"I see," said the fox. "Now then, tell me your story again. I didn't understand it all. Begin it all again."

"Stop!" cried the fox. "I can't hear you. You can't talk easily with the snake on your head. His tail is round your neck. It stops your voice from coming out. Come down, Snake, and sit beside the man. Then I can hear your story, and give my judgment."

So the snake came down from the man's head, and sat on the ground beside him.

"Oh foolish man,
Why don't you take
Your big strong stick
And kill the snake?"

So the man picked up his stick, and he hit the snake and killed him.

"Thank you, Fox!" he said. "You have saved my life. What can I give you? Do you want a sheep? Please, wait here, and I will bring you one from my flock."

The fox was happy. He lay down, and waited for his gift.

The man went to his flock to fetch a sheep.

He called his dog. His dog ran up to him, and the man picked up the dog and hid him in his shamma. Then he went back to the fox.

When the dog saw the fox, he jumped out of his master's shamma. He ran to the fox and bit his neck.

The fox looked up to heaven, and said, "All animals are ungrateful, but man is the most ungrateful of all."

And so he died.

Exercises for The Ungrateful Snake