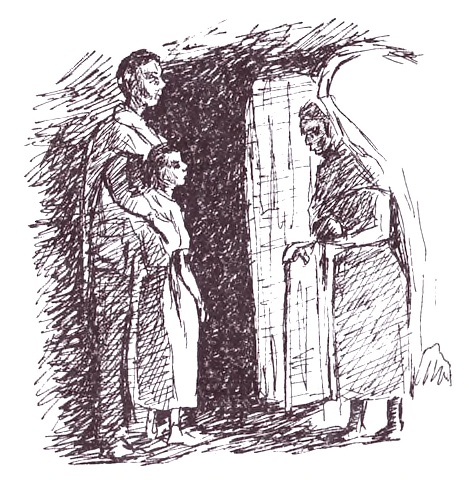 Hannah's father looked at her.

"Did the story frighten you?" he asked her.

Suddenly, someone knocked at the door again.

Her father was angry.

Slowly, Hannah went to the door and opened it. The old neighbour stood there. Hannah was very frightened. The old woman's face was ugly.

"She is looking at me," Hannah thought. "She is putting her evil eye on me!"

Then the old woman smiled.

"Ah, Hannah," she said. "You are a good girl. My little daughter was like you."

Tears filled the old woman's eyes, and fell down her cheeks.

"What happened to your daughter?" he asked the neighbour.

"God took her," the old woman said. "She died many years ago. She is with Him now, in Heaven. She was like your little girl, good and happy and sweet. God bless you, little Hannah."

Then she turned and went away.

Hannah and her father went back to sit by the fire.

"Well, Hannah," her father said. "Are you frightened of our neighbour now?"

"You thought she had the evil eye," her father said. "You know, Hannah, that story is a bad one. Many good people have suffered because of it.

When I was a child, an old man lived near our house. He wasn't friendly to other people. He shouted at them sometimes. I think he had sickness in his mind.

'He has the evil eye!' everyone said.

No one talked to that poor man. Children threw stones at him. At last he died, alone and unhappy."

"But did he have the evil eye, Father?" Hannah asked.

Exercises for The Man with the Evil Eye Part Seven

Exercises for the whole story The Man with the Evil Eye