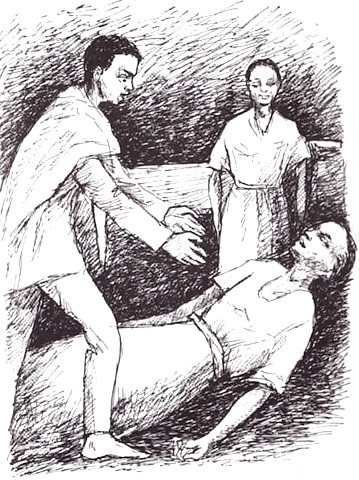 The little girl's father thought for a long time. At last he said, "Your mother died one year ago. We will invite all our friends and relatives to a ceremony to remember her. You, my child, must prepare the food for the feast. Your aunts will help you. I will make the tala."

The next day, the little girl's father went to see his neighbour.

"My wife died a year ago," he said, "and I'm going to make a ceremony to remember her death. There will be a big feast. I need some help from you."

"Some help?" said his neighbour. "What do you want?"

"I want to make a lot of tala," the little girl's father said, "but I don't have enough pots. Lend me your pots, neighbour. I'll give them back to you after the feast."

"Ah," his neighbour said. He looked a little worried.

"You want to borrow my pots? I don't know. My pots are good ones. Perhaps you will break them."

"No, no," said the little girl's father. "I will be very careful. Please, neighbour. I need your help."

At last, the neighbour agreed.

"Take my pots then," he said angrily. "But if you break them, you must pay me a lot of money!"

The little girl's father took all the neighbour's pots home. He carried the beautiful pot with the chip in the top very carefully. He put it down on the floor near his bed. Then he picked up a stick and touched it. Nothing happened.

The little girl was watching.

"It's the wrong stick, father," she said. "You need our neighbour's stick. He keeps it in the roof of his house."

"Then we must wait," her father said.

The day of the ceremony came. The little girl and her aunts worked hard. They made piles of injera and many dishes of delicious food. Friends and relatives came from far away to remember the dead woman.

"She was so beautiful," one of them said.

"And she was so good and kind," said another.

"She was my best friend," a third person said.

The man brought the neighbour's pots out of the house. They were full of tala. He kept only one inside. It was the pot with the chip in the top.

The little girl's father pulled her away from the other people.

"Look, our neighbour is here now, with his daughter," he said. "His house is empty. Let's go and find his stick. You must come and show me where it is."

They hurried to the neighbour's house.

"It's there, up there, Father," the little girl said, and she showed her father the stick in the roof.

Her father took it down, and together they ran back into their own house. The guests were outside. They were happy. They were talking and laughing. No one saw the man and his daughter.

"Now, Father," said the little girl. "Touch the pot with the stick and you will see my mother."

The man touched the pot with the stick. At once, the little girl's mother was there. She lay on the ground. Her eyes were shut. She didn't speak or move.

Outside the house, someone was calling.

"Where is our host? And his little girl? Why aren't they here with us?"

"Come, Father, we must go to our guests again," said the little girl.

She picked up the stick and touched her mother's body and at once it became a pot again.

The man looked at his daughter. He was very angry.

"My neighbour killed my wife!" he said. "He keeps her in his house, and she is his servant! He has the evil eye!"

"What are you going to do, Father?" asked the little girl. She was frightened.

"You will see," her father answered. "Go outside and serve food to our guests."

Exercises for The Man with the Evil Eye Part Five