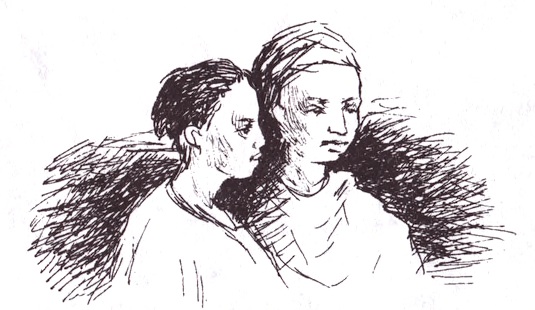 "Once upon a time," she said, "There were two little girls."

"Yes," said Hannah. "They were neighbours, and they lived near each other. They were very good friends.

The younger child lived with her mother and father. The older girl's mother was dead. She lived alone with her father.

The younger girl's mother was a very beautiful woman, with a lovely face and a sweet voice. Only one thing spoiled her beauty. A little chip was broken from her front tooth.

But one day, the little girl's mother became sick. She grew thinner and thinner, and weaker and weaker. And at last, she died.

The little girl was very sad when her dear mother died. She cried and cried. Her friend heard the noise, and came to see her.

"Why are you crying?" she asked. "What's happened?"

"My mother is dead!" the little girl said. "I'm so unhappy! Oh, Mother, Mother! I can't live without you!"

The big girl sat down beside her, and put her arms around her friend and they cried for a long time together.

Nearly a year went past, but the little girl never forgot her mother. She thought about her every day.

One day, the two girls' fathers decided to go to the market together. The market was a long way away, and they left early in the morning. Now the little girl was alone.

"I'll go and see my friend," she thought.

She ran to her friend's house and called out, "Are you there, dear friend? It's me!"

There was no answer.

She called out again.

The door began to open slowly. The older girl was there. She stood still and looked down at the ground. She didn't smile at her little friend.

"What's the matter?" the little girl asked her. "Are you sick?"

The big girl shook her head.

"I'm your friend," the little girl said. "Tell me about it. Perhaps I can help you."

The big girl came out of the house and shut the door behind her. The two children sat down together outside.

Exercises for The Man with the Evil Eye Part Two