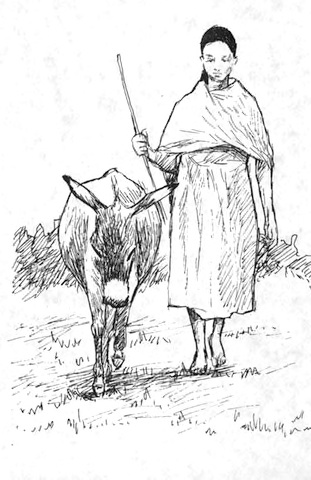 His wife came out of the house.

He touched her with the first stick. At once she became a donkey.

She lifted her head and tried to speak, but she could not.

Her husband touched her with the other stick. At once she became a woman again.

"Husband, that's wonderful!" she said. "It's a real miracle! How did you do it?"

"I prayed to God," her husband said, “and he helped me. And now, wife, I am going to punish my enemy."

"You know my enemy," her husband said. He was looking at her. He wasn't smiling now. "It's the rich man, our neighbour. He comes to our house when I am working in the fields. He gives you bad ideas. 'Ask your husband for new clothes,' he says. 'Ask him for gold jewellery. Ask him for a miracle.' Am I right? Did our rich neighbour give you all these ideas?"

His wife said nothing.

"And did you listen to him?" her husband went on.

His wife did not look at him. She was ashamed.

"I'm sorry," she said. "It's true, he said all those things. He wanted me to divorce you and marry him. And I listened to him."

"And do you want to divorce me and marry him?" her husband asked.

She looked at him. Her eyes were full of tears.

"No! Dear husband, I want to stay with you for ever, and I will never listen to him again."

"Then take this stick," her husband said, "And touch the rich man with it."

He gave his wife the first stick, but he hid the second one in the roof.

The next day, he went to work. Soon, the rich man arrived at the woman's house.

"Well?" he asked her. "And can your husband make miracles yet?"

"Yes," she said, and she touched him with the first stick.

At once, the rich man changed into a donkey.

"Now," said the woman. "You can go to work and help my dear husband."

She took the donkey out to the fields. Her husband was working there. He was moving stones from his brother's field.

From that day, the poor man gave the donkey many heavy loads to carry. The donkey carried stones away from the fields, it took sacks of tef to the market, and it brought flour and coffee home again.

For many years, the donkey worked for the poor man. The poor man was not so poor now. The donkey was helping him. He was becoming richer.

One day, the poor man looked at the donkey. It was tired and old. It stood still. Its head was bent down. The poor man was sorry for it. He went into his house and brought out the second stick. Then he touched the donkey with it.

At once, the rich man stood there. But he was not a handsome young man now. He was old. His back was bent. He was very, very tired.

"You tried to take my wife away from me," the poor man said. "That was wrong. Go home now. Don't look at other men's wives again."

The rich man went away, and he never came back again. But the poor man and his wife lived happily together for many more years.

Exercises for The Magic Stick