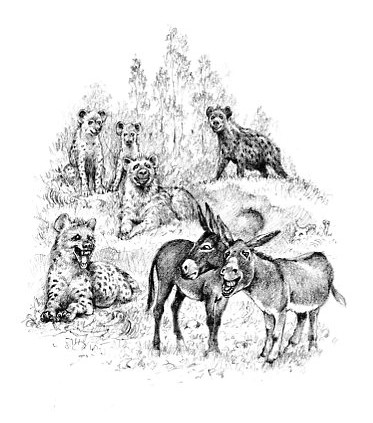 One day, the hyena's son died. A donkey heard the news. He ran to tell his relatives.

"The hyena's son?" said all the other donkeys. "That's good news. All the hyenas are our enemies."

"Brothers, we must be careful," said one old donkey. "We must go to the hyena's funeral and show respect."

"What? Go to the hyena's funeral?" the other donkeys said. "We don't want to go. We're frightened. The hyenas will eat us."

"Listen," said the old donkey. "If we don't go, the hyenas will be angry with us. They will have a reason to eat us."

"You are right," said all the other donkeys. "We must go to the hyena's funeral. If we go, the hyenas will be happy with us. Perhaps they will become our friends."

So the donkeys went to the hyenas' house. The hyenas saw them outside their house.

"Here come the donkeys," they said. "Why are they coming? Have they come to laugh at us?"

The donkeys heard the hyenas. They were frightened and they began to sing:

"Great hyenas,
You hunt all night,
And we hear you sing
In the cold moonlight.
Your teeth are long.
Your eyes are bright.
Though your food is black,
Your dung is white.
But now your son
Lies on his bed.
And he is dead!
Our lord is dead!"

The donkeys sang, and they cried, and they sang again.

The dead hyena's uncle answered them:

"Your song is good.
Your words are sweet.
Come in, dear donkeys.
Take a seat!
But what did you bring
For us to eat?
Hyenas are hungry.
Hyenas want meat!"

The donkeys were very frightened now.

"My lords," the oldest donkey said. "We came to show respect to you. We are sorry that your son is dead. We will pray to God. He will comfort you. Now we must go back to our home."

The donkeys began to go.

"Wait!" the hyenas said. "You cannot leave. You must give us something to eat. Cut off your lips and give them to us."

The donkeys looked at each other.

"If we give them our lips, perhaps they will let us go," they thought.

So the hyenas cut off the donkeys’ lips, and ate them. Again, the donkeys tried to go.

"Stop!" cried the dead hyena's uncle. "My brothers, will you let these donkeys go? Look at them! We can see their teeth! They are laughing at us!"

Before the oldest donkey died, he looked at the hyenas and said,

"Wicked hyenas,
We came with our song
To comfort you.
But we were wrong!
Next time you are hungry,
Don't pretend
That you need a reason
To eat your friend!"

Exercises for The Hyena's Funeral

Listen to the stories: