This is a long and beautiful story in four parts. Answer the questions at the end of each part before you read the next one. Think about these questions before you begin.

Chat is a stimulating leaf that people chew.

A mesob is a brightly coloured basket that people use like a table.

Injera is a kind of flat bread made from tef, which is a species of grain grown in Ethiopia. 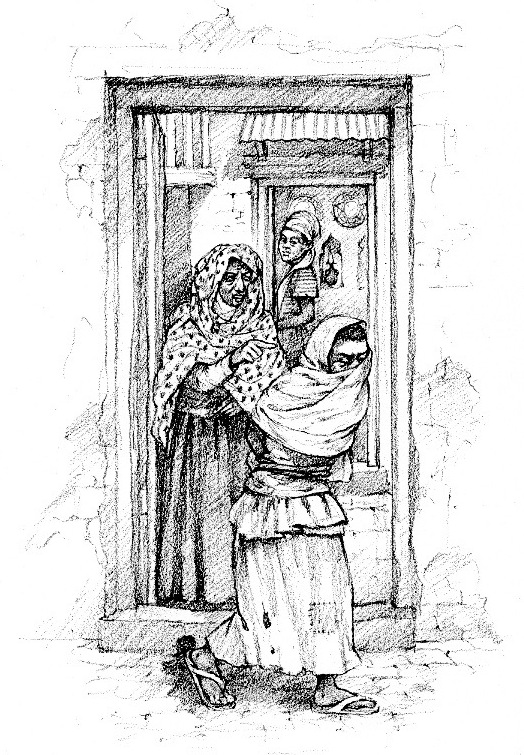 In the city of Harar, long ago, a little girl lived with her father and mother. Her name was Irit.

One day, Irit's mother died. At first, Irit's father was sad, but soon he married again. After a year, another little girl was born to the man and his new wife. They called her Nurit.

Irit and Nurit grew up together. Irit was a good girl. She was clever and kind. Nurit was not good. She was foolish and selfish. But the girls' mother only loved Nurit. She did not love Irit at all.

One day, the girls' mother said to them, "Go to the field, girls, pick some chat, then take it to the market and sell it."

So Irit and Nurit went to the field to pick some chat. They wrapped the chat in big leaves and made bundles. Then they took the bundles to the market to sell.

On the way to the market, they met an old man. He saw the bundles of chat, and he stopped and spoke to the girls.

Irit smiled at the old man. She took some chat from her bundle, and gave it to him.

"Take it, Grandfather," she said. "I hope it will help you."

He turned to Nurit.

"Now, my daughter, give me some of your chat," he said.

Nurit laughed at him.

"There is no chat in my bundle," she said. "There are only cabbages. I don't want to give them to you. I'm going to sell them in the market and get some money."

The old man was angry.

"I do not believe you," he said. "You will not sell your chat. No one will buy from a girl like you."

The market was full of people. They were buying and selling everything. But no one wanted to buy the girls' chat. They tried and tried to sell it, but they could not.

"That old man cursed me!" Nurit said angrily. "No one will buy our chat because of him. I hate that old man!"

"Don't say that, sister. He was a good old man," Irit said quietly.

When the two girls went home, their mother was waiting for them.

"What's this?" she said. "You still have your bundles of chat? What happened? Why didn't you sell them?"

Their mother was very angry.

She tied a rope around Irit, and sent her out, into the street.

Exercises for Irit and Nurit Part 1

Poor Irit was alone now, away from her family's house. She was very sad.

She began to cry.

Suddenly, she heard a voice.

She looked up. An old man with a kind face was standing in front of her.

"My mother has sent me away," said Irit, "because I didn't sell my chat in the market. She doesn't love me. She tied me up with this rope. She sent me out of the house. I can never go home again."

"My poor child," said the old man. "Come to my house. I will look after you."

Irit looked at the old man.

The old man untied the rope, and Irit went to his house with him. She helped him. She cooked his food, and cleaned his house. She gave him his food in a beautiful mesob. She was happy now.

"Grandfather, wake up," she said. "The golden water is here."

The old man picked Irit up and threw her into the golden water. Then he went outside and looked up into the sky.

"Wind! Wind!" he called out. "Pick up this girl and take her to her father's house!"

At once, a strong wind began to blow. It picked up Irit, and carried her to her father's house. It put her down on the roof.

Irit's mouth was full of the golden water. She spat it out, and it fell down into the courtyard of the house. It was not water now, but metal. It was pure, yellow gold.

Nurit came out of the house, and began to sweep the courtyard. Soon, she found the gold. She was very surprised.

"Mother!" she called out. "There is gold here, in the courtyard!"

Her mother came and looked.

"You are right," she said. "That's wonderful! Pick it up, my darling, and put it in a jar. We will keep it carefully."

She went inside, and Irit spat again. More gold fell into the courtyard. Nurit looked up, and saw her.

"Mother!" she shouted. "Irit is on the roof of the house!"

Her mother was angry. She did not come outside again.

"Don't talk to me about that girl," she said. "How can she be on the roof? She went away and she never came back. I'm sure the hyenas have eaten her."

Nurit was still looking up at her sister.

"Where did this gold come from, Irit?" she asked.

"I don't believe you," Nurit said.

Irit spat more gold out of her mouth.

"Oh!" said Nurit. "It's true! How did you do it? How did you change your spit into gold? Come down here, my darling sister. I will get you some nice things for you to eat. Come and tell me everything. Perhaps I can learn to spit gold too. Oh, I am so happy to see you again!"

"Nurit isn't happy to see me," she thought. "She doesn't love me. She only wants gold."

She wanted to punish Nurit.

"He likes to eat it from the floor," said Irit.

"What happened next?" said Nurit. "Go on, my dear Irit. Tell me more."

"At night, black water came into the house," said Irit. "When it came, I woke him at once. He threw me into the water. After that, I began to spit gold. Now, Nurit, you promised to give me some nice food. Where is it?"

"If you want food, go to my mother and ask her," she said. "I'm not going to give you anything. I'm going to the old man's house. Soon I will spit gold from my mouth too."

Exercises for Irit and Nurit Part 2

Nurit did not like to work. She cooked the old man's food badly. She only wanted gold.

She put the food down on the floor. The old man was angry, but he did not say anything.

When it was night time, the old man went to sleep, but Nurit sat and waited.

"That stupid Irit is rich," she thought. "And I will be rich too."

Soon, black water began to come into the house. Nurit went to the old man and woke him.

The old man woke up.

"You foolish, lazy girl," he said.

He picked Nurit up and threw her into the water. Then he went outside and looked up at the sky.

"Wind! Wind!" he called out. "Pick this girl up and take her to her father's house."

At once a strong wind began to blow. It picked Nurit up and carried her to her mother's kitchen. It blew her into a corner, under the injera pan.

In the morning, Nurit's mother came into her kitchen. She began to light her fire. Suddenly, she saw Nurit's foot under the injera pan.

Her mother pulled her out from under the injera pan.

"Nurit! What has happened to you?" she said. "You are ugly! You are not a pretty girl now. You are ugly all over!"

"Your sister is a wicked, wicked girl," her mother said. "Don't worry, my darling. I will punish her."

Nurit was sad now. She hid in her mother's house.

Exercises for Irit and Nurit Part 3

Nurit was uglier than before, but Irit was more beautiful. Men wanted to marry her. Her father chose a good young man, and arranged the marriage.

His wife was angry.

"This young man is too good for Irit," she thought.

She took Irit's hand and pulled her to the river. A big python lived near the river.

The python was a wise old snake.

"I know this woman," he thought, "and I know her daughter. The woman is cruel and wicked, but the girl is good. If I do not help her, the woman will kill her."

"Don't be afraid, my daughter," he whispered to Irit, and he opened his mouth and swallowed her.

The next day, the bridegroom and his friend came to Irit's house to take her.

The bridegroom was sad. He and his friend began to go away, but then they saw the python by the door.

"Do not be sad, my young friend," the python said to the bridegroom. "I can give you a wife. She is a very beautiful girl, and wise and clever, too. Do you want her?"

"Yes!" said the bridegroom. "Let me see this beautiful girl, and I will marry her."

So the python spat Irit out of his mouth. The bridegroom was very happy when he saw her. He married Irit, and they lived happily together.

But he and the best man took Nurit and cut out her tongue. They put her in the kitchen, to grind the hot peppers.

"You were cruel to your sister," they said to her. "You told lies about her. Learn your lesson. If you do bad things to people, bad things will happen to you."

Exercises for Irit and Nurit Part 4