The Sheep and the Goat 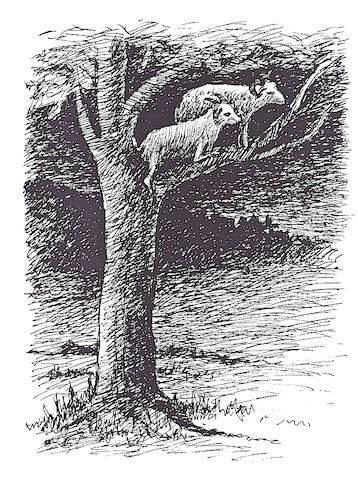 "Our master never takes us to the river to drink the clean, cool water and eat the long, green grass," said the goat. "Let's go alone. We will start early tomorrow morning."

So the sheep and the goat got up early the next morning. They left the farm, and began to walk towards the river. They walked and they walked.

"I'm tired, too," said the goat. "But think of the cold, clean river, and the long, green grass. We'll be there soon."

Suddenly, a big lion ran up to them.

He opened his mouth, and showed his long white teeth.

"Wait!" said the goat. "Don't eat us, Lion. You haven't got time. Didn't you know? The sky is falling on our heads! Run! Save yourself!"

The lion was frightened. He roared, and ran away, into the forest.

The sheep and the goat went on. They were laughing.

"We're cleverer than the lion," they said.

Soon, they met a leopard.

"Stop!" said the goat. "Listen to me, Leopard. You can't eat us. The sky is falling down. We're running away. You must run too!"

The leopard was frightened. He waved his tail and ran away, into the forest.

The sheep and the goat laughed louder.

"That stupid leopard!" they said.

Then they met a hyena.

"Mm, a sheep and a goat!" said the hyena. "They're my favourite meat."

"No!" said the goat. "Stop, Hyena! Haven't you heard the news? The sky is falling down. Run away! Be quick!"

The hyena was frightened. He closed his mouth and ran away, into the forest.

"We're the cleverest animals of all," they said.

At last, they came to the river. The water was clean and cold. They drank and drank. Then they went to the field. The grass was long and green. They ate and ate. They were very happy.

"All right," said the sheep, and he followed his friend up the hill away from the river.

Slowly, they went on. At last, they came to the top of the hill. The path went through the forest.

"It's a long way," said the goat. "We can't go home tonight. Look, it's nearly dark. We must stay here all night."

"But I'm frightened," said the sheep. "There are many wild animals here. Perhaps they will come and eat us."

"Don't worry," said the goat. "Look, can you see that big tree? Let's climb it. We will sit in the branches all night. We'll be safe there."

And they went to sleep.

After a long time, they suddenly woke up. Animals were talking under the tree. The sheep and the goat looked down. In the moonlight, they could see the lion, the leopard and the hyena. They were sitting under the tree, and talking.

"I was a fool today," said the lion. "I met a sheep and a goat on the road. I wanted to eat them. Then the goat said, 'Don't eat us. The sky is falling. Run away!' So I ran away, into the forest. They were tricking me. The sky didn't fall at all!"

"I met that sheep and goat," said the leopard. "They tricked me too."

"If I catch those two," the lion roared, "I'll pull off their heads, and take out their hearts, and eat every part of them."

Up in the tree, the sheep and the goat were very, very frightened.

"What are we going to do?" whispered the sheep, very quietly.

"Nothing," whispered the goat. "We must stay here and wait."

The sheep and the goat sat still in the tree. But then the sheep began to move.

"I must," said the sheep. "I drank too much water today. I need to go to the toilet."

"You can't!" said the goat. "Keep still! If your urine falls on the lion, the leopard and the hyena, they will find us here. Didn’t you hear them? They will pull off our heads, and take out our hearts and eat every part of us!"

"Turn over on to your back, then," said the goat. "Perhaps your urine will run into your wool. Perhaps it won't fall on them."

The sheep tried to turn over, but he couldn't do it. He slipped, and fell out of the tree, on to the heads of the animals below.

"Aaghh!" roared the lion. "The sheep and the goat were right! The sky is falling on my head!"

"On mine too!" shouted the leopard.

"And on mine!" barked the hyena.

So they ran home safely, and they never went alone to the river again.