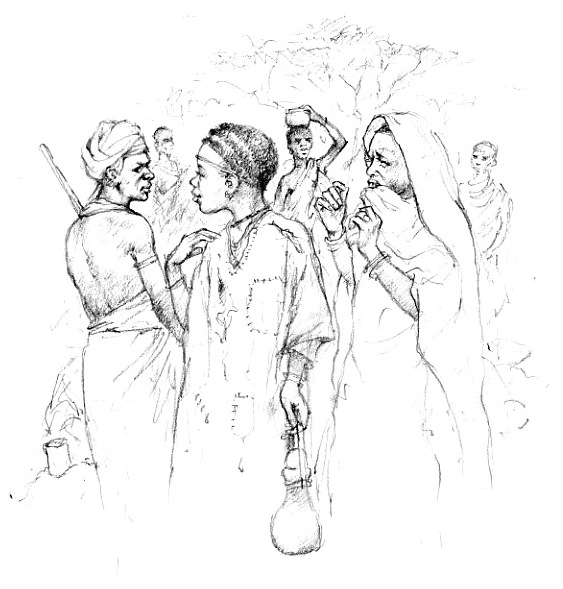 The two sisters grew up together. Jahiti was a beautiful girl. She was good and kind. But Jahiti's stepmother did not love her.

Jahiti's sister was an ugly, lazy girl, but her mother loved her. She gave her daughter beautiful white clothes, and gold jewellery. Jahiti's sister did not help in the house, or fetch the water, or carry things home from the market. But her mother always gave her the best food to eat.

One day, Jahiti's stepmother said to her daughter, "My darling, you are a big girl now. Soon we must find a husband for you. Put on your best dress today, and your gold necklace. Go to the market. The young men will be there. They will see you, and they will fall in love with you. We will choose the best one to be your husband."

Jahiti's father heard his wife. He called his oldest daughter.

"Jahiti, you must go with your sister," he said. "You must find a husband, too."

His wife heard her husband.

"That stupid Jahiti!" she thought. "I don't want to find a husband for her. I want to find one for my own dear daughter."

Jahiti went to her stepmother.

"Please, Stepmother," she said. "My father wants me to go to the market with my sister. He wants me to find a husband, too. But my dress is old and dirty. Will you give me a new one?"

"A new dress? For you?" her stepmother laughed. "Do you think I am rich? No, you stupid girl. I have no new dress for you. Go now. Your sister is waiting."

Jahiti and her sister walked to the market. Jahiti was sad.

"No one will talk to me," she thought. "My dress is old and dirty. The young men will not look at me."

There was a handsome young man at the market, too. He was with his friends. He saw Jahiti, and fell in love with her. The young man and his friends came up to the girls, and they began to sing:

"Who do we like? Who is the best?
Here's an ugly girl in a new white dress.
We say 'no' to her, but we say 'yes'
To the beautiful girl in the ugly dress!"

The young man wanted to talk to Jahiti, but her sister was angry.

"Well?" said Jahiti's stepmother. "What happened at the market?"

"Oh, Mother," Jahiti's sister said. "The young men were so foolish. They sang,

"What?" said her mother. "That is very strange. Don't worry, my dear. Next week you will go to the market again, and you will wear Jahiti's dress, and she will wear yours."

So the next week, the two sisters went to the market again. Now Jahiti was wearing her sister's beautiful white dress, and she wore her sister's gold necklace round her neck. But her sister was wearing Jahiti's dirty old clothes.

The handsome young man and his friends were there waiting for them. They sang:

Not the ugly girl, in the dirty dress!

To the beautiful girl in the new white dress!"

The handsome young man came to Jahiti and said, "Beautiful girl, who is your father? Who is your mother? I want to come to your house and make you my bride."

"Mother," said Jahiti's sister. "The young men looked only at Jahiti, and the most handsome of them all wants to marry her. I am angry with my sister. I want that young man for myself."

Her mother was very angry.

"That girl, Jahiti, will always bring us trouble," she said. "I don't want her here in my house any more. Listen, daughter. Take your sister to the forest. Cut branches from the trees to make a place for a bride. Tell your sister to climb up into the tree. While she is in the tree, put some laga bark near the river. In the evening, she will go to the river to fetch water. She will slip on the bark and fall into the water. And that will be the end of her!"

So the sisters went to the forest. Jahiti climbed up a tree. She was happy.

"My bridegroom will come for me," she thought. "He is handsome and strong, and he loves me."

She began to cut branches to make the place for the bride.

Her sister picked up some laga bark and ran to the river. She put the bark down by the water. Then she went back to the forest.

"Jahiti!" she called. "Come down from the tree, you lazy girl! My mother is calling you. She wants water. You must go to the river and fill your pot."

Jahiti came down from the tree. She left the branches in the forest and ran home. She picked up her pot and hurried to the river. But her feet slipped on the laga bark, and she fell into the water.

Now, a wicked demon lived in the river. He jumped up and caught Jahiti. She could not escape from him.

Jahiti's father, the merchant, was travelling far away from home.

The next day, when he returned, he said to his wife, "Where is my daughter? Where is my dear Jahiti?"

Then the bridegroom came to the merchant's house, with all his friends.

"Where is Jahiti?" he said. "Where is my beautiful bride?"

"I don't know," said Jahiti's stepmother. "She went out, and she didn’t come home."

Jahiti's father was very sad. He did not eat. He did not drink. He could not sleep at night.

"Eat, husband. Drink, my dear.
Jahiti will come. She will soon be here."
But her husband answered,
"I will not drink, I will not eat.
I want my child, my daughter sweet."

Then he said to his wife, "Go and call my daughter. Call Jahiti. Tell her to come home to her father."

So Jahiti's stepmother went down to the river.

She stood by the water, and she called out,

"Jahiti, your father will not eat.
He will not drink, he sits at home.
Why are you hiding? Why do you wait?
Your mother is calling. Come, child, come!"

She did not see Jahiti, but she heard her voice.

"My mother is dead, but I know you.
You wanted to kill me, and drown me too.
Tell my father to drink and eat.
He has lost Jahiti, his daughter sweet!"

"She will not come," his wife said. "She is a wicked girl. She does not respect you. She said,

'Tell my father to drink and eat.
Jahiti has friends that she wants to meet!'"

Her husband did not believe her.

"What have you done to my daughter?" he said. "Go and find her, and bring her to me.

I will not drink, I will not eat!
I want Jahiti, my daughter sweet."

The girls from the village heard the merchant's words. They all went to the river.

"Jahiti, your father calls you again.
He will not rest. He waits at home.
We are your sisters. We are your friends.
Come home with us. Jahiti, come!"

But Jahiti called out from the middle of the river,

"I have no mother. My father's wife
Brought me here to take my life.
Tell my father he must forget
His poor Jahiti, his daughter sweet!"

The village girls went back to Jahiti's father.

"Your daughter cannot come home," they told him. "You must forget her."

Jahiti's bridegroom could not forget his bride. He thought about her every day.

"She was my bride, my darling, and I have lost her," he thought sadly.

One day, he was taking his father's cattle to the river. Suddenly, he saw a girl in the water. She was thin and sad. She was crying.

"Jahiti! My love! Is that you?" the young man called out. "Why are you there, in the river? Why don't you come out?"

"I can't come out," answered Jahiti. "A demon has caught me. His magic holds me here."

"How can I help you?" asked her bridegroom. "What can I do?"

"I am growing weak and thin here in the river," said Jahiti. "Bring me some food."

"I have food with me here," cried her bridegroom. "I will throw it to you. Catch it, Jahiti!"

He threw her some food. Jahiti caught it, and ate it.

"I will come again tomorrow," said her bridegroom. "I will save my food and give it to you." 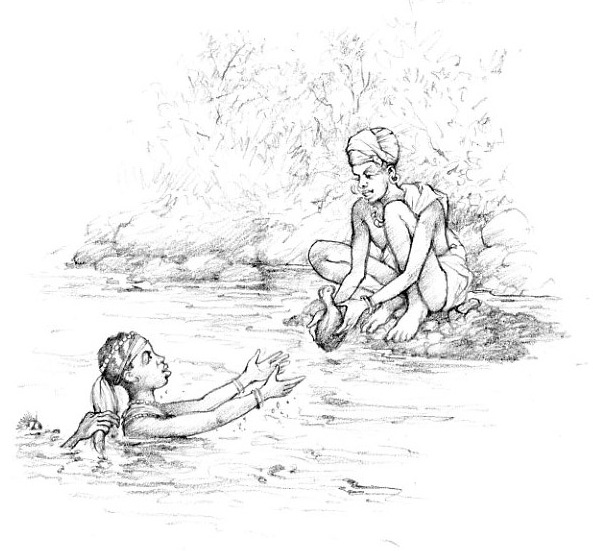 So the next day, the bridegroom did not eat his food. He kept it, and took it to Jahiti. He gave her his food again on the third day, and on the fourth.

Now Jahiti was growing stronger and fatter, but her bridegroom was becoming thin and weak.

"What is wrong with you?" his father asked him. "Are you sick?"

"No, Father, I am not sick," Jahiti's bridegroom said.

"Then why don't you eat?" asked his father. "What are you doing with your food?"

"My son," said his father. "I am your father. If you have a problem you must tell me. Perhaps I can help you."

At last, Jahiti's bridegroom said, "A demon took my bride, my dear Jahiti. Now she is in the river, and she can't come out. Every day I take her my food. She eats it, and she is growing stronger, but now I am thin and weak."

So the bridegroom went back to the river.

At once, she came out of the water.

She answered, "My master, the demon, is always hungry. Kill a bull and cut up the meat. Bring a big piece to the river and throw it in. The demon will see the meat. He will jump up to catch it. Then he will let me go, and I will run out of the water."

The bridegroom went back to his father. He told him everything.

"Take my biggest bull," his father said. "Kill it, and throw the meat to the demon."

So the bridegroom killed the bull, and he took the meat to the river. He threw it into the water. At once, the demon jumped up to catch the meat. Hungrily, he began to eat it.

Jahiti began to run out of the water. But another demon was waiting near the edge of the river. This demon was blind.

"Meat! I can smell meat!" he shouted. He heard Jahiti, and he jumped on her. She pushed him away. His hand caught her breast, and tore it off, but Jahiti ran out of the river, into the arms of her bridegroom.

"My beautiful girl!" he cried. "You are safe at last!"

"I am safe, but I am not beautiful now," Jahiti said. "Look at me. I have only one breast."

"You are beautiful to me," said her bridegroom.

So Jahiti and her bridegroom were married, and they had many children, and lived happily ever after.

Exercises for The Story of Jahiti