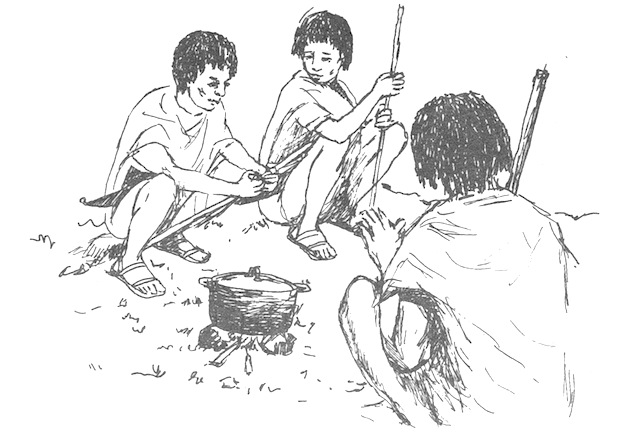 Once upon a time, there were three men called Mogola, Gadeto and Orbis. Mogola and Gadeto were big men, but Orbis was very small.

The three men were walking together along the road. They were on a long, long journey. The sun was high in the sky and it was very hot.

"Let's stop here, under these trees," Mogola said. "We can rest. It will be cooler later. We can go on then."

The three men stopped under the trees. They put up their tent and rested.

"There's no village here," Gadeto said. "We can't get any food. What are we going to eat?"

So Mogola killed the goat. He cut it up and put it into a pot. Gadeto and Orbis made a fire and began to cook the meat.

"We need more wood for the fire," Orbis said. "I'll go and look for some."

And he went to look for wood.

Gadeto looked into the pot. The goat smelled delicious. But there was not very much meat.

"Your goat was very small," Gadeto said to Mogola.

Mogola looked into the pot, too.

The two men looked at each other.

"Let's trick him," Mogola said. "Then we can eat all the meat ourselves."

Soon Orbis came back with more wood for the fire.

"Is the meat ready yet?" he asked.

"Oh no," Gadeto said. "This goat was very old. It will take a long time to cook. Let’s lie down and go to sleep. We'll wake up later and it will be ready."

"I've got an idea," Mogola said. "We'll go to sleep and then we'll dream. One of us will have the best dream. We'll let him eat all the meat."

Orbis looked at Mogola and Gadeto.

"They're trying to trick me," he thought.

The three men lay down. Soon Mogola and Gadeto were asleep. But Orbis didn't sleep. He waited and waited.

Very quietly, Orbis went to the fire. He took the meat out of the pot and began to eat it. He ate and ate and ate. Soon, all the meat was finished. Now only the bones of the goat were in the pot.

Orbis wasn't hungry now. He was happy. He lay down and went to sleep.

At last, Mogola and Gadeto woke up. They woke Orbis, too.

"Oh!" Mogola said. "I had a wonderful dream! God took me to Paradise. He showed me beautiful gardens and rivers of water and gave me wonderful food to eat."

"You were lucky," said Orbis. "What was your dream, Gadeto?"

"Oh!" said Gadeto. "It was a beautiful dream! An angel carried me to Mecca. I met the Prophet Mohammed and we talked about many, many things."

"Oh," Orbis said. "My dream wasn't beautiful at all. I was lying here, by the fire, and a big strong man came up to me. He put his foot on my neck. I'm small. I couldn't move. He ate all the meat out of the pot. What could I do? I couldn't stop him."

"What?" said Mogola and Gadeto.

They ran to the pot and looked inside. Only the bones of the goat were there.

"But it wasn't a dream!" Mogola said. "Somebody did come. Somebody ate all our meat!"

Gadeto and Mogola were very angry.

"What do you mean?" said Orbis. "I called and called, but you didn't hear me."

"Yes, I did," said Orbis, "but you were in Paradise with God. You couldn't hear me."

"You didn't call me," said Gadeto.

"I did," said Orbis, "but you were far away. You were in Mecca, with the Prophet Mohammed."

Gadeto and Mogola looked at each other.

"Orbis is small," they thought, "but he is not stupid at all."

Exercises for The Best Dream