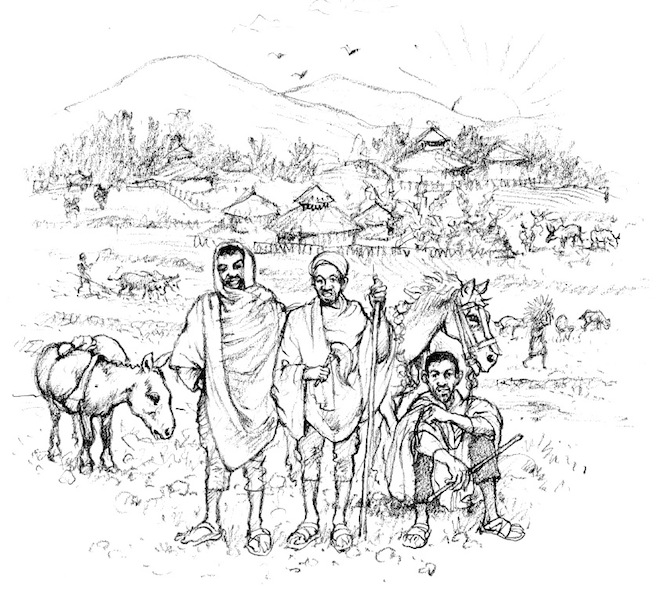 An old man had three sons.

"Soon I will die," he said to his friends. "I must make my will, and give my property to my children. Please, my friends, bring me three boxes."

His friends brought the boxes to him. The old man put soil in the first box. He put money in the second box, and jewellery in the third box. Then he closed the boxes. He wrote the name of one of his sons on each box, and gave them to his friends.

"When I am dead, give these to my sons," he said to them.

At last, the old man died, and his friends gave the boxes to his sons. The young men opened them.

"There's soil in my box," the first son said.

"And money in mine," said the second son.

"And I have jewellery in mine," said the third son.

"Why did our father give us these things?" they asked each other, but they could not find the answer.

"Let's go and visit the wise man," they said. "Perhaps he can help us."

The three brothers began to walk to the wise man's house. On the way, they passed a river. A crocodile was in a field near the river. It was licking water from the grass.

"What does this mean?" the brothers asked, but none of them could answer.

Soon they came to a beautiful valley full of green grass. A horse stood on the grass. It was very thin, but it did not eat.

"This is strange," the brothers said. "The horse is very thin. Why doesn't it eat the grass?"

The road passed through the valley and came to a desert. A fat donkey stood in the desert.

"Look at this donkey," said the brothers. "Why is he fat? This place is a desert. There is no grass here, and no water."

At last they arrived at the wise man's house. They showed him the three boxes.

"Your father was a good, clever man," the wise man said, "and his will is a good one. Here is its meaning."

He looked at the soil in the first brother's box.

"Your father's land is for you," he said. "Plough it. Plant seeds. Grow crops. Be a good farmer."

He looked at the money in the second brother's box.

"Your father gave you his money," he said. "Buy cows and sheep and goats. Look after your cattle well. Be a good herdsman."

He looked at the jewellery in the third brother's box.

"The goods of your father are for you," he said. "Sell them. Buy more goods and sell those. Be a good merchant."

The three brothers thanked him, and began to go.

"I have one more message for you from your father," the wise man said. "It is a promise. If you obey his will, you will all become rich, happy men."

The three brothers thanked the wise man again, and went home. The oldest brother took the land. He ploughed it, and sowed seeds, and grew good crops. He was a farmer.

The second brother took the money. He bought cows and sheep and goats. He became a herdsman.

The third brother took his father's goods. He sold them and bought more. He became a merchant.

But the three brothers were not rich, and they were not happy.

"I have land, but I have no goods and no money," the farmer thought. "Look at my fields! There is too much grass. Wild animals come and eat it. Then they eat my crops. "

Suddenly, he remembered the crocodile, licking the grass in the field by the river.

"Now I understand," he thought. "I don't want wild animals on my land. I want cattle. I will ask my brother to give me some."

The herdsman was unhappy too.

"I have many cows and sheep and goats," he thought, "but I don't have any land. My cattle are all thin."

He remembered the thin horse in the green valley.

"I understand its meaning now," he thought. "I need land for my cattle. I will ask my brother to give me some."

The merchant was thinking too.

"I have many goods," he said to himself, "and I travel with my donkeys to many places. But I have no house, and I live far away from my family."

He remembered the fat donkey in the desert.

"Yes," he thought. "I understand now. I will ask my brother for land. Then I will build a house and live near my family."

When the wise man heard the news, he smiled.

"The old man was clever," he thought, "and his sons obeyed his will. They respected their father and learned from him, and now they are rich and happy."