The Landlord and the Ostrich

Landlords are people who own land or other property. They often have other people working for them. They have power over other people.

A teacher in a school has power over his or her students.

Fathers and mothers have power over their children. 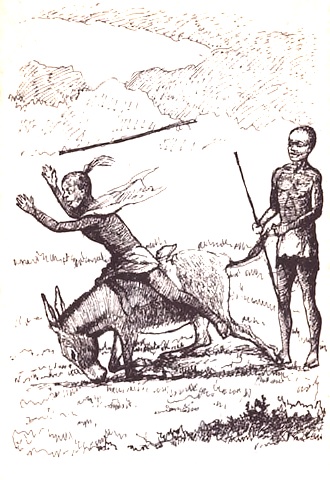 Once upon a time, there was a wicked landlord. He was very rich. He had many cows and donkeys and many serfs worked on his land.

This landlord liked to ride across his land on his donkey with all his guards behind him. He shouted at the poor serfs, "Work hard, or I won't give you anything to eat! Produce a good harvest, or I'll beat you!"

The landlord's friends were all the other landlords. They often met and ate and drank together. Every year, they had a competition. The landlord whose serfs produced the biggest harvest won the competition.

This landlord liked to win the competition. When he won, he was very happy. But when he didn't win, he was very angry, and he killed some of his serfs.

The serfs hated the landlord. One of them, a clever man, decided to do something.

He went to the landlord's hut and said, "My sorghum harvest was good this year and I've made some beer. Come to my hut and drink some of it with me."

So the landlord sent a servant for his donkey and he rode off to the serf's hut. The serf walked beside him.

Now, the serf had tied a rope across the road. The landlord didn't see it. His donkey tripped on the rope and the landlord fell to the ground.

So the landlord sent his donkey home, and he walked on with the serf. Soon, they came to the serf's home.

An ostrich lived in the serf's home. She knew him well, and she knew all the other serfs who lived nearby. She never made any trouble for them. But she didn't like strangers, and she always attacked them. The ostrich saw the landlord and she began to run after him.

"Help!" shouted the landlord. "Help me!"

The serf said nothing. He watched and waited.

The landlord tried to run, but the ostrich could run much faster. She caught the landlord and kicked him, and the landlord fell down and died. The serf looked down at his enemy.

"This wicked landlord sowed the seeds of hate," he said, "and now he has received his harvest."

Exercises for The Landlord and the Ostrich