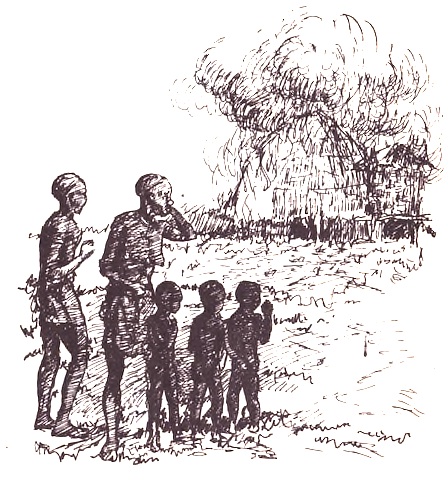 Once there was a man called Obang. He was old and sick. He lay in his hut alone.

“Soon I will be dead,” he thought.

Outside, his wives were cooking food and his children were playing.

“Who will look after them when I have gone?” Obang thought.

Then he heard voices. A young man was talking and laughing.

“That's the voice of my son,” Obang said to himself. “Why is he talking and laughing with his friends in the middle of the day? Why isn't he working?”

Someone came to the door of the hut.

"Who is it?" Obang called out.

It was Obang's friend. He came into the hut and sat down beside the old man.

"Old friend, I'm dying," Obang said. "And I'm worried. Who will look after my family when I'm dead?"

"My son is lazy and weak," said Obang. "Every day he goes out with his friends and eats and drinks. But I have a plan. He must learn to work, and you must be his teacher."

"When I am dead, burn my huts," Obang said. "Burn my foodstore. Burn everything. I can't take all these things with me. Burn them all."

Then they smelled something. They looked at each other.

They ran towards the fire. The old man's huts, his food store, his clothes and his tools - everything was burning.

His wives and children were crying.

Obang's son was drinking with his friends but he heard the noise and ran towards the crowd.

"Come back with us," his friends said. "Have another drink. You can't do anything here."

But Obang's son looked at his father's wives and children.

The young man worked hard. Every morning he started working early. He finished working late every evening. He built more huts on his father's land. He filled the stores with food. His father's wives ate well and their children were happy again.

“My old friend's plan was a good one,” he thought. “His son has learned to work, and I was his teacher.”

Exercises for The Father's Plan