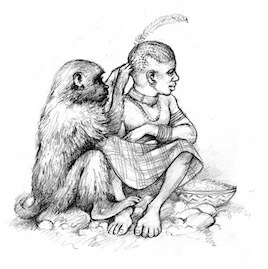 The first man in the world was very poor. He had nothing to eat.

"I will grow food for myself," he said.

He planted pumpkins and corn for his food.

Near the man's field was a troop of baboons. They watched the man. They wanted to eat his food. Every day, they waited. When the man left his field and went away, the baboons came and ate the man's food.

One day, the man saw the baboons in his field. They were eating his ripe pumpkins. He ran after them.

"Go away!" he shouted. "Don't steal my food! Leave my field alone!"

The baboons ran away. But one little baboon child could not run fast. She stayed in the field.

The man picked her up. The little baboon put her arms round his neck. He liked her.

The man took the baboon child to his hut. He looked after her. He gave her food to eat and water to drink.

One day, when the baboon child was big enough, the man took her to the field with him. He began to sow his seed in the earth. The baboon child followed him. She picked up the seeds, and ate them. The man sat down beside the baboon child. She climbed onto his knees.

"No," the man said gently. "Don't pick up the seeds. Don't eat them. Leave them in the earth. They will grow and we will have food to eat. The plants will make new seeds too. We can sow them in the earth next year."

The baboon child understood the man's words. She stopped picking up the seeds and eating them.

The baboon child watched him. She took seeds from his hands, and put them in the earth.

The plants grew. The baboon child helped the man. She weeded the field and brought in the harvest with him.

They forgot their mother, the baboon, and they lived as men and women. They were people. They were our ancestors.

Exercises for The Baboon Child