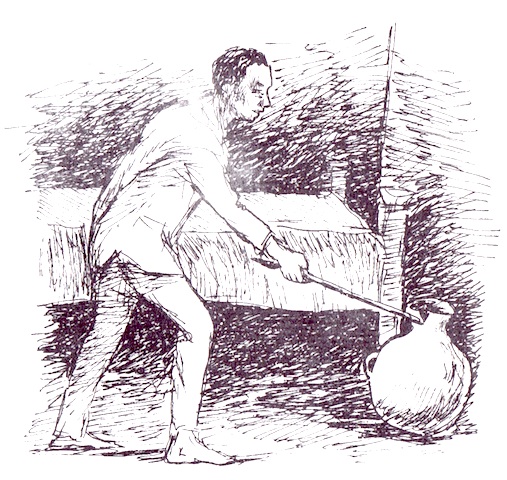 So the little girl went outside.  She served more food and tala to the guests. But her father went quietly to all the men off his family.

"Bring your weapons," he told them. "There is an enemy at my feast. He is a man with the evil eye."

His relatives went home quietly one by one. They came back with their weapons.

"Now, child," the little girl's father told her. "Go into the house and bring out the pot and the stick."

So the little girl brought out the pot and the stick. She carried them very carefully and put them down beside her father. He picked the stick up and touched the pot. At once the body of his wife was lying on the ground.

Everyone was very surprised.

The neighbour was frightened now. He was moving quietly away.

"Quick!" the little girl's father said. "Catch him! Don't let him go! He is the man with the evil eye!"

His relatives brought the neighbour back. They stood all round him and showed him their weapons. The neighbour was frightened.

"This is my wife's body," the little girl's father said, "but she is dead. You were keeping her body. You were using her. She was your servant. But where is her soul?"

"Give my wife her soul!" the little girl's father shouted, "Or we will kill you!"

"Yes, give her back her soul!" shouted all the man's relatives.

Everyone looked at the little girl's father.

"I promise," he said. "If you bring my wife's soul back again, you can go. But you can never live in this place again."

The man with the evil eye bent over the dead woman's body. At once she opened her eyes. Then she sat up.

"Mother!" shouted the little girl, and she ran into the woman's arms.

"My own dear wife!" her husband said.

No one was looking at the neighbour and his daughter. Very quietly, they were walking away. And after that day, no one ever saw them again.

But the little girl and her father and mother lived happily together for many more years.

Exercises for The Man with the Evil Eye Part Six