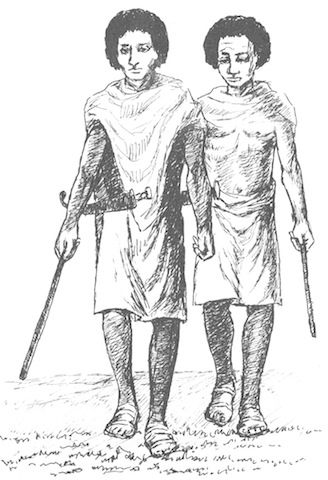 The wedding was soon arranged. Delibis hurried back to his father, the king.

"Hariri is a wonderful girl!" he said. "The best girl in all Afar!"

"I am very happy for you, my son," the king said. "Send camels and cattle for the feast. Take some servants and all my armed men. Go to her house and marry her. Then bring her back to the palace."

"Oh no, father," said the prince. "She doesn't know that I'm the king's son. I don't want to tell her yet. I won't take any armed men with me. When I go to her house, I'll take only one servant. She'll think I'm a poor man. If she marries me, I'll know she really loves me."

It was a long way from the king's house to Nakrusa's village. The prince and his servant started their journey early in the morning. But they walked all day. The sun rose higher and higher in the sky. It became hotter and hotter.

"That's all right, sir," the servant said. "Look, we're coming to a water hole. You'll find some water there."

They came to the water hole and Delibis looked down into it. The hole was deep. The water was a long way down.

"Climb down and fill my water bottle," Delibis said to his servant.

So Delibis climbed into the water hole himself. He drank the cool clean water and filled his bottle. Then he looked up at his servant.

But the servant laughed at him.

He picked up a big stone and lifted it above his head.

"He's going to throw it down and kill me!" thought Delibis.

"Wait a minute!" he shouted. "Don't kill me! You'll never escape. Someone will soon find my body. They'll tell my father, and he'll send his men to kill you. I've got a better idea."

The servant put the stone down.

"We'll change our clothes," said Delibis. "You take my clothes and I'll take yours. You can be the master, and I'll be the servant."

"I won't kill you, I promise," said the prince. "And I won't tell anyone that you're my servant."

The servant picked up the stone again.

"Very well," the prince said, "but don't you want to marry the most beautiful girl in Afar? How will you find her father's house? Only I know the way."

The servant thought for a moment.

"Do you really promise?" he said. "You won't kill me? You'll be my servant and I'll be your master?"

"Yes," answered Delibis. "You know me. I always keep my promises."

"All right," the servant said, and he pulled Delibis out of the water hole.

They changed their clothes. The prince took the servant's, and the servant took the prince's. Then they walked on along the road.

At last they came to Nakrusa's village. Everything was ready for the wedding. The women were cooking a wonderful feast. Guests were arriving. People were singing and dancing.

Hariri couldn't wait to see the face of her dear Delibis. She looked out of her hut, but there was the servant, dressed in Delibis's clothes.

"This man isn't my husband," she said. "I've never seen him before."

"Don't be a fool," her father said. "Look at his clothes, his dagger and his shoes. He was wearing them when he came here before."

"But my husband is a clever man," said Hariri. "This man looks like a fool. Let me ask him some questions."

"Oh very well," Nakrusa said. "But be quick. The guests are waiting. The wedding must begin."

So Hariri came out of her hut and spoke to the servant.

"Tell me," she said, "what is the heaviest thing a man can carry?"

Hariri looked behind the servant.

"Who is that man, standing under the tree?" she wondered.

"Here's my next question," she said. "What is the sweetest food in the world?"

Hariri was watching the man under the tree. He was coming towards her now.

"I have one more question," she said to the servant. "What is the most beautiful smell in the world?"

The servant shook his head.

"What a stupid question!" he said. "Flowers have the sweetest smell! Everyone knows that."

Delibis was standing behind his servant now. He smiled at Hariri.

"This man says he's my husband," said Hariri, "but he's a fool. His answers are stupid!"

"Daughter!" he said. "What are you saying? Look, the wedding guests are here. The feast is ready. Take this man. He is your husband!"

"Please, father," Hariri said. "I can't marry a fool. Let me talk to his servant."

She looked at Delibis. "Did you hear my questions?" she asked him.

"Yes," said Delibis, "and here are my answers. Your first question was, 'What is the heaviest thing a man can carry?' My answer is 'A promise.' A promise is a very, very heavy thing. For me, just now, it's the heaviest thing in the world. Next, you asked, 'What is the sweetest food?' I know the answer to that question. I was alone once in the desert. I had no food. I nearly died of hunger. Then I met a girl. She gave me a piece of dry bread. It was the sweetest food in the world, because I was so hungry.

Hariri laughed and clapped her hands.

"Did you hear that, Father?" she said. "This man is my husband!" 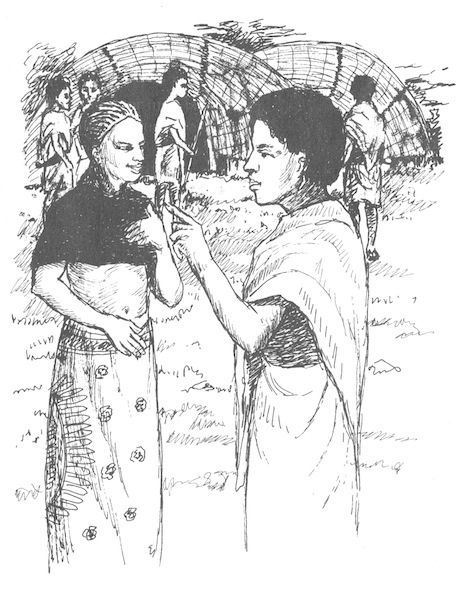 "But he's only a servant," Nakrusa said. "I'm tired of all this nonsense, Hariri. I'm your father. You must obey me. Marry the master, not the servant."

Hariri went and stood beside Delibis.

"Master or servant, this is the man I will marry," she said.

The servant was frightened when he heard this. He fell down on his knees.

"Oh please, please forgive me," he said to Delibis. "I was a fool. Don't tell the king, your father."

"The king? Your father is the king?" Nakrusa said to Delibis. "My dear boy, this is wonderful! Hariri, my child, you are right, of course. This is the right man for you. I always knew you were a clever girl. You're going to marry a prince! Where are the singers? Is the food ready? Let the marriage begin!"