The King of the Forest 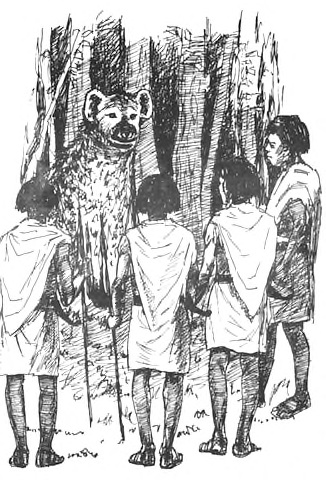 Near the country of the Afars, there was once a big forest. A tribe of hyenas lived in the forest. They had a strong and clever king. Nobody went near them. Everyone was afraid of the hyenas and their king.

Four Afar brothers lived near the forest. They were good hunters. Every day, they went to hunt for meat.

One day, one of the brothers said, "I want to go into the forest. I want to see what is there. I'm not afraid of the hyenas, or their king."

"We want to see the forest too," they all said. "We'll all come with you."

The forest was dark and very big. The four brothers walked for a long time. They didn't meet anyone.

Then, suddenly, a hyena ran into the path in front of them.

"We're four travellers, and we're walking through the forest," the first brother said. "We don't want to hurt you. Let us go on."

"No," the hyena said. "Our king doesn't like strangers. You must come with me and see him."

The brothers looked round. There were more hyenas now. They were angrily showing their teeth.

The king of the hyenas was very big. He had long teeth and a red tongue.

"Why did you come into the forest?" he asked the first brother. "You know I don't like strangers. I want to eat you. Who do you think will save you?"

"And you?" the king of the hyenas said to the second brother. "Who will save you?"

"The men of my tribe will save me," the second brother said. "They will see my blood and they'll be angry. They'll come with their spears and kill all my enemies. I trust in the men of my tribe."

"What about you?" the king of the hyenas said to the third brother. "Who will save you?"

"My Mother, the Earth, will save me," said the third brother. "She gives me my food, and my water comes from her. I trust in Mother Earth."

The king of the hyenas turned to the fourth brother.

The fourth brother fell down on his knees.

The hyena king looked at the first brother again.

He said to the second brother, "You trust the men of your tribe. You're right. They're strong and brave. We don't want a war with them. We can't kill you. You can go."

Then he turned to the third brother.

"And you trust in Mother Earth," he said. "She gives you your food, and the water you drink comes from her. But we hyenas also live on the earth. We need her too. We cannot hurt her. You are free to go."

"And me? What about me?" cried the fourth brother.

So the hyenas killed the fourth brother, and ate him.

Exercises for The King of the Forest