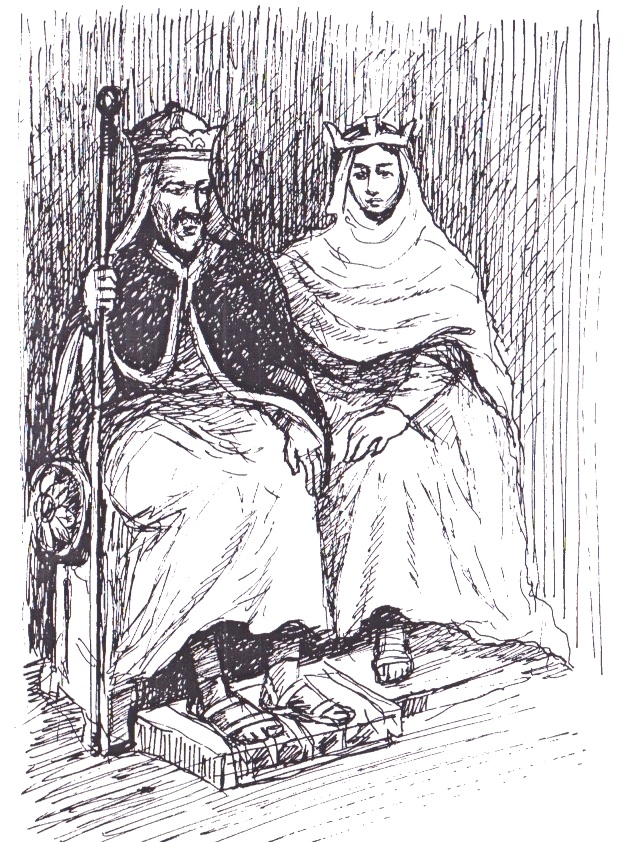 A long time ago, there was a king. He lived in a palace and he had many servants. But the king had no sons. His only child was a daughter.

A little boy lived near the palace. His mother and father were dead. He liked the palace's fine stone walls and its big courtyard. He came to play there every day.

The king looked out of his window and saw the child. The little boy was big and strong. He could run fast and jump high. He was handsome, too. The other children liked the boy. He was their leader and they all obeyed him.

"Who is this child?" the king thought. "What is he doing here in my palace? Does he think he is a prince?"

Every day, the king watched the boy. Slowly he became afraid.

"This child is too strong. The other children like him too much," he thought.

So the king went to visit a wizard. He told him everything.

"Who is this boy?" the king asked the wizard. "What will happen to him?"

The wizard did not speak. He was afraid of the king's anger.

"My Lord," the wizard said at last. "This boy will be a great king one day. He will kill you and take your throne." 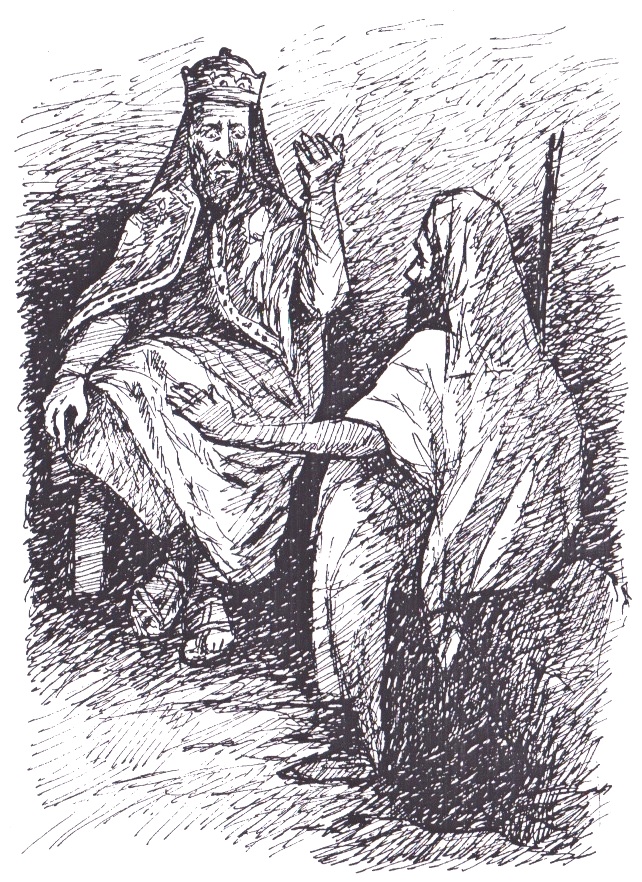 The king went back to his palace. His eyes were dark with anger. He could not eat and he could not sleep. At last he sent for his servants.

"Catch the boy," he said to them. "Put him in a box and throw the box into the sea."

The servants were frightened of the king and they obeyed him.

That night there was a terrible storm. The wind blew, and big waves ran across the sea. The waves carried the box far, far away, and threw it on a beach.

The next morning, an old man was walking along the beach. He saw the box and ran up to it. Inside, someone was crying.

Quickly, the old man opened the box. He jumped back, very surprised.

He looked at the boy, and at once he loved him.

"Where are your father and mother?" he said.

"I don't know," answered the boy, and he began to cry.

He took the child home to his wife. She was very happy.

"After all these years," she said, "God has given us a son. We will call him Zeyta Hasebe, because we did not expect him."

Twelve years passed. For a long time there was peace in the land, and the king stayed in his palace. But then, one day, a war began. The king began to travel to the most distant parts of the country.

One day he came to the house of the old man and his wife. The old man welcomed the king.

"Hurry," he said to Zeyta Hasebe. "Bring some water and wash our guest’s feet."

Zeyta Hasebe ran to find water. He washed the king's feet. The king smiled at Zeyta Hasebe. He liked him. 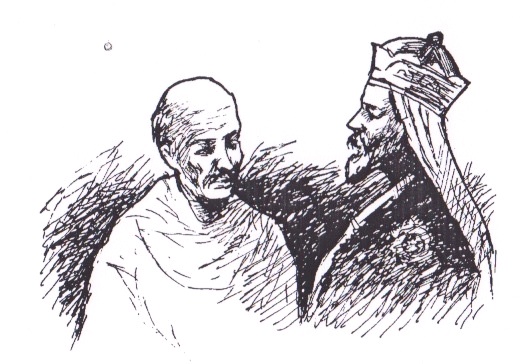 "One day, twelve years ago," the old man went on, "I was walking on a beach. It was the morning after a great storm. I found a box. I opened it, and inside it was a little boy. I took him home with me. My wife was very happy because God has not given us any children. This boy became our son. We called him Zeyta Hasebe."

The king frowned. He looked at Zeyta Hasebe angrily. He did not like him now.

"He is my enemy," he thought. "He will kill me and take my throne."

The king thought quickly. He tried to smile again.

"Listen," he said to the old man. "I like your son. He's a fine boy. I must go back soon to my palace. Send him to me, and I will look after him. He will be a rich man, a powerful man. A great future is waiting for him."

He called to one of his servants.

"Give me some paper and a pen," he said.

The servant brought some paper and a pen, and the king wrote a letter.

"To my guards," he wrote. "Catch this boy and kill him. And bury his body in front of my palace."

"Can you read this?" he asked the boy. The boy looked at the paper and shook his head.

"Good," said the king. "Don't lose this paper. Give it to the soldiers at the gate of my palace. They will bring you to me."

"Come soon," the king said, and then he went away.

The old man and his wife were sad. They did not want to lose Zeyta Hasebe. They loved him. But Zeyta Hasebe was happy and excited.

"When can I go to the palace and see the king, Father?" he said every morning. "Can I go today?"

At last, the old man and his wife agreed. They called Zeyta Hasebe to them.

"Our dear son," they said. "We can't keep you here any longer. You can go to the king's palace. But don't forget us. Come home again soon."

Then they blessed Zeyta Hasebe and said goodbye.

Zeyta Hasebe began his journey. The road was long. It went through deep valleys and high mountains. On the highest mountain of all, he saw the wizard's eagle in the sky. The eagle flew down to Zeyta Hasebe. It began to peck at his clothes. The king's letter fell out of the boy’s pocket. The eagle picked it up in its beak and flew away with it.

"No! No!" Zeyta Hasebe called out. "Bring back my letter! It's from the king!"

But the eagle had already gone.

Zeyta Hasebe sat down on a rock. He was unhappy.

"The king will never see me now," he thought. "His servants will keep me away from him."

Then he saw something white on the ground. He picked it up. It was another letter. Zeyta Hasebe looked at it, but he couldn't read it. He didn't understand the language.

"Did the eagle drop this?" he thought. "Perhaps the king's servants will understand it. Perhaps it will help me to see the king."

He put the new letter in his pocket and went on down the road.

At last, Zeyta Hasebe came to the king's palace. It was a fine, stone building.

"But where are the soldiers?" he thought. "Where are the king’s guards and all his servants?"

After a long time, a servant came out of the palace. He saw the boy standing by the gate. 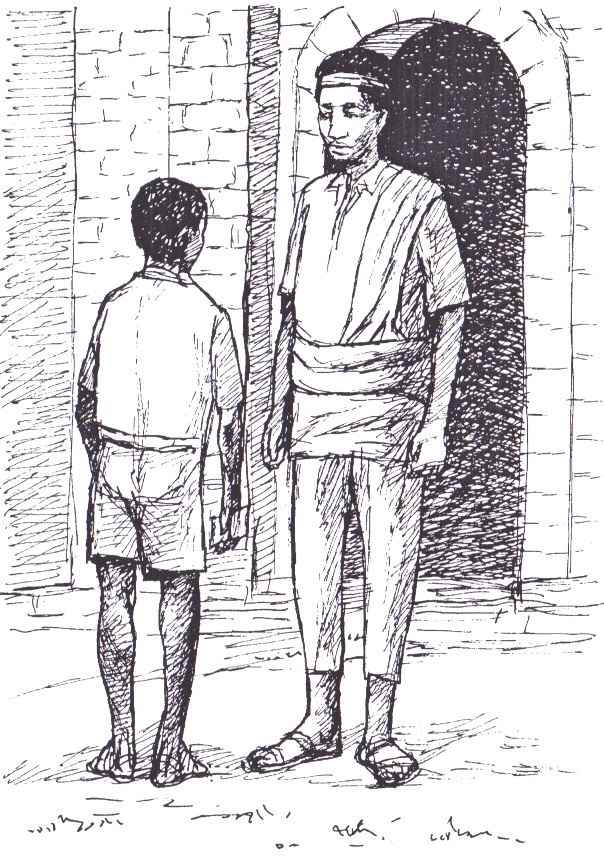 "The king invited me to come here," Zeyta Hasebe answered.

So Zeyta Hasebe showed him the letter. The man opened it and began to read.

"This man is Zeyta Hasebe," the letter said. "He is a prince. I have chosen him to be my daughter's husband. Arrange the marriage quickly. Do not wait for my return."

The servant bowed to Zeyta Hasebe at once.

"My master," he said. "I am happy to see you. The princess is here. I will obey the king and arrange the wedding. You will be married tomorrow."

The next day, Zeyta Hasebe married the king's daughter. The cooks made a great feast. The musicians played wonderful music. Zeyta Hasebe saw his bride and she was very beautiful. He loved her at once.

In the evening, the king came home. He rode up to the palace on his white mule.

"What's happening here?" he said. "Why are all these people here? What is the music for, and why is everyone dancing?"

"My Lord," the servant said, "Prince Zeyta Hasebe arrived yesterday. He showed me your letter. I obeyed all your instructions and today he married your daughter."

When he heard this, the king was very, very angry.

"What?" he shouted. "This boy, my enemy, has married my daughter?"

His mule was frightened by the noise, and it reared up. The king fell off. His sword ran into his side and he died.

And so Zeyta Hasebe became the king of the whole country. He sent a servant to bring the old man and the old woman to the palace.

Zeyta Hasebe became a great king. He was just and honest. His people loved him, and he became the father of many fine princes.