Nine and One Make Ten 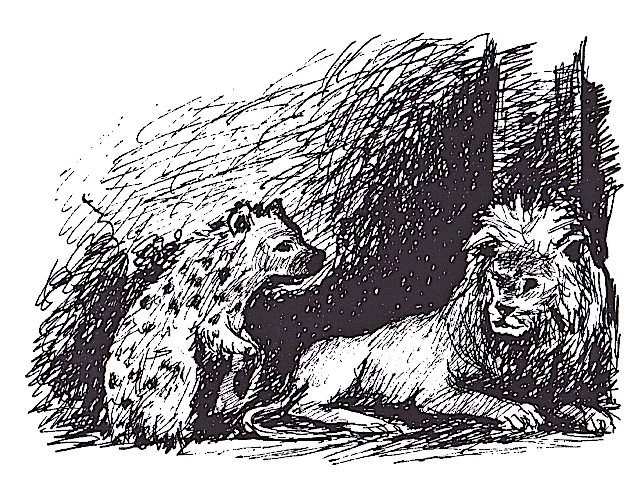 Once upon a time, nine hyena brothers hunted with a lion. They caught ten fat cows.

"You are nine," the lion said, "and I am one. That makes ten. And there are ten cows. So I will have nine, and you can have one."

The hyenas were frightened of the lion.

Then they went home to their father.

Their father was angry with them.

"What?" he said. "You caught ten cows, and you gave nine to the lion? That's not right. Give me your cow. I will take it to the lion. He must give nine cows to us."

So the hyena took the cow, and went to find the lion. His sons came with him.

"Father, please come home with us," they said. "You don't know the lion. He's very big, and very strong. If we make him angry, he will kill us."

Their father didn't listen to them.

"The nine cows are yours," he said. "The lion will listen to me."

"My sons," said the old hyena. "What is that hill in front of us? It wasn't there yesterday."

"Oh," their father said. He began to walk more slowly. His sons walked slowly too.

"Look at the long, yellow grass in front of us," said the old lion. "Where did it come from? It wasn't there yesterday."

"And what are those two balls of fire?" their father asked them. "I've never seen those before."

"Those are not balls of fire," said his sons. "Those are the lion's eyes."

The sons drove the cow to their father. The old hyena stopped walking. He pushed the cow in front of him.

"My lord," he called out to the lion. "Here is the tenth cow. My foolish sons took it and brought it home, but it belongs to you."

Then he turned round, and ran home, and his sons ran after him.

"The lion is too strong for us," they said. "We understand that now."

Exercises for Nine and One Make Ten