Tej is an alcoholic drink made from honey 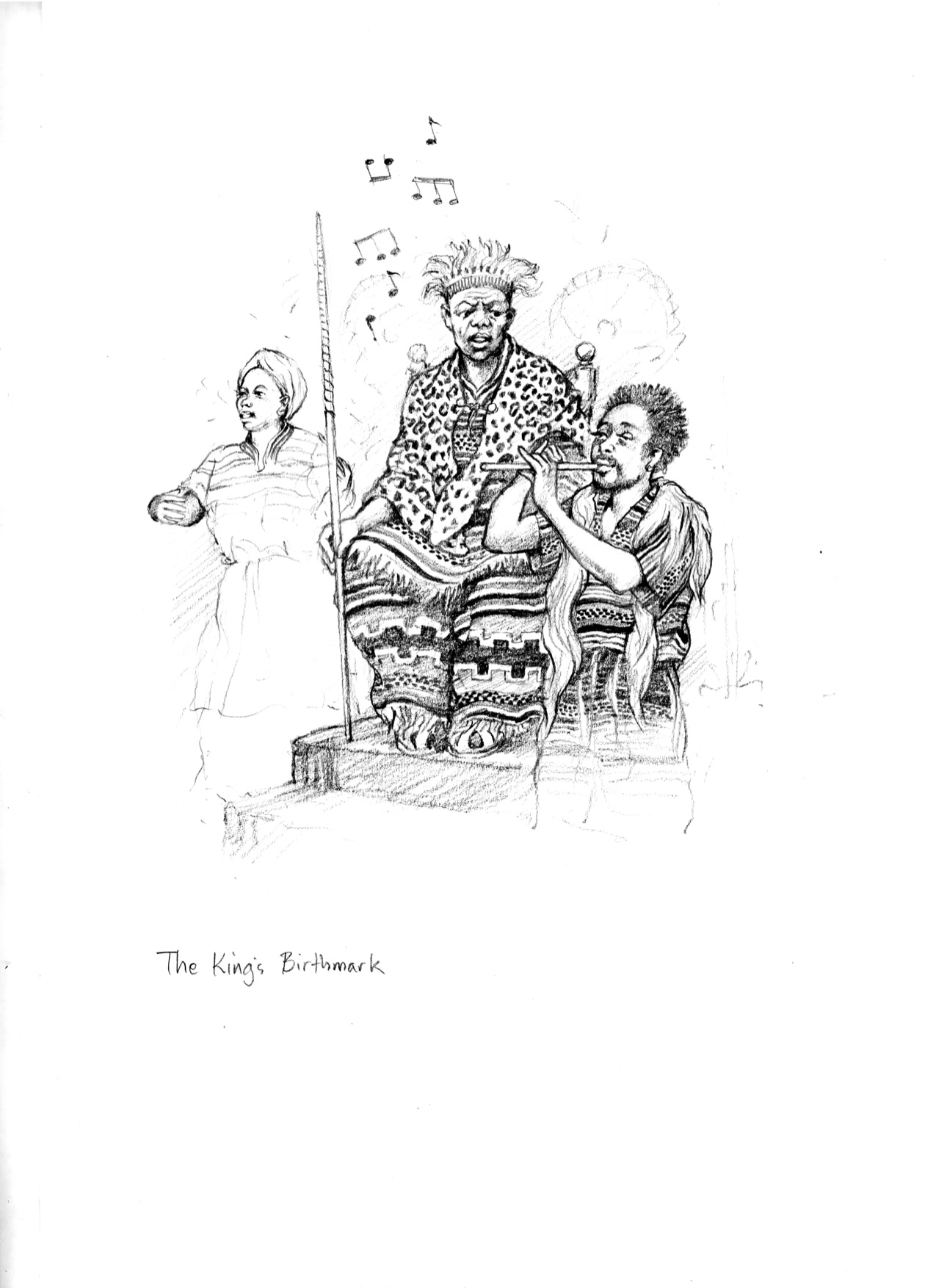 In the old days a king ruled Wolayita. He was wise, and kind to his people, and they loved him.

The king always wore a turban on his head. He never took it off. The turban covered the king's secret. This secret was a birthmark, an ugly mark on his head.

Nobody knew about the birthmark, and the king was ashamed of it.

"Why does our king always wear a turban?" people asked each other, but nobody knew the answer.

One day, the king went to take a bath. He took off his clothes, and took the turban off his head. But he forgot to cover the window of his bathroom.

A man was walking along the road outside. He looked in through the bathroom window and saw the king. And he saw the birthmark on his head.

The man was very surprised.

"I know the king's secret!" he thought. "He has a birthmark on his head!"

He hurried on into the town.

"Listen," he said to his brother. "I know something."

"What do you know?" asked his brother.

"Stop! Don't tell me!" cried his brother. "The king's secrets are dangerous. If you tell the king's secrets, his soldiers will take you to the edge of the gorge. They will cut off your head and throw your body down into the gorge."

"Really?" said the man. He looked worried. "But I must tell someone the secret!"

The man tried to tell other people the king's secret, but no one listened. They were all afraid.

The secret grew and grew inside the man.

At last he had an idea. He ran to the river and dug a hole in the bank.

After that, he filled the hole again, and went home. He felt better. The secret was not inside him now.

The man never went back to the river. Reeds soon grew up and covered the hole. They grew big and strong.

One day, many years later, the king decided to give a big feast.

"I want music at the feast," he told his servants. "Call the musicians. I want them to play for me. My guests will come from far away. The musicians must play their best music."

The musicians were worried when they heard this.

"We need new flutes," they said. "Our old flutes don't make good music now. Let's go down to the river, and cut some reeds. We'll make new flutes from them."

They went down to the river and cut some reeds. They made beautiful new flutes from them.

The night of the feast came at last. The cooks made delicious food, and plenty of beer and tej. Everyone ate and drank well.

"Where are the musicians?" the king called out. "Let them play now!"

Two musicians, a singer and a flute player, came into the room.

"I have a new song for you, Your Majesty," the singer told the king. "Here are the words:

Our king is lion.

He is brave and strong.

He looks after his people

The king looked up. He was angry.

"Take this man away," he cried. "Take him to the gorge and cut off his head!"

His servants ran forward and caught the poor flute player. They took him to the gorge, and cut off his head.

The king sat down again.

"Where is the second flute player?" he asked. "Let him play."

The second flute player came and stood in front of the king.

"Start the song again," said the king to the singer.

"Our king is a lion,

He is brave and…." began the singer.

But the second flute player's flute began to sing too, and it sang louder than the singer.

The king was very, very angry. He jumped to his feet.

"This man is my enemy too," he shouted. "Take him to the gorge and cut off his head. Are all my people against me? Where are the elders of Wolayita? Send them to me!"

The elders came to the king. They asked many questions, and spoke to many people.

"The flute players were good men," everyone said. "They loved the king. They never said anything bad about him."

At last, one wise elder said, "Where are the flute players' flutes? Bring them to me."

"Where did this flute come from?" the elder asked the other musicians.

"The flute players cut reeds from the river," they told him. "They made their flutes from them."

The elder went to the river. He talked to many people there. At last, he came back to the king.

"Your Majesty," he said. "Long ago, a man was walking past your palace. You were taking a bath. He looked through the window, and saw the birthmark on your head. He wanted to tell your secret to everyone, but he was frightened. So he dug a hole near the river, and spoke into the hole. Reeds grew in that place. The musicians made their flutes from them. The musicians didn't tell your secret. It was the flutes."

The king was sorry when he heard this.

"My flute players did nothing wrong," he said, "but I killed them. It's true. I have a birthmark on my head, and I am ashamed of it."

He took off his turban, and showed his birthmark to the people. Nobody said anything. Nobody went away.

"It's not important," they said. "Our king is a good man. His birthmark doesn't matter."

"You cannot hide the truth," the elders told the king. "It will always come out in the end."

The king learned his lesson. He ruled wisely and well for many more years, and he never wore his turban again.

Exercises for The King's Birthmark