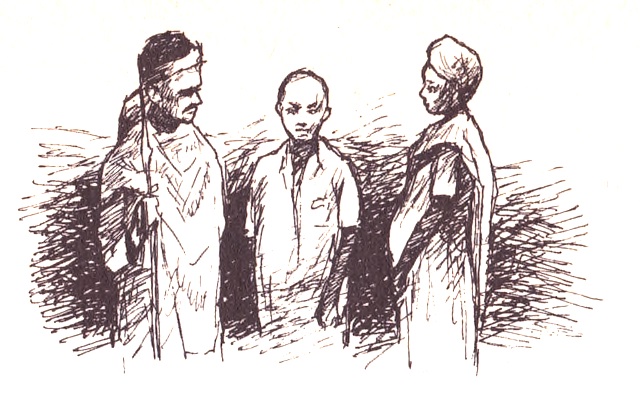 Once there was a soldier. He had a good wife and a fine son, but he wanted many more sons. One day his wife became pregnant and the soldier was very happy.

He called his son and said to him,  "Listen, my boy. A war has started in our country. I’m a soldier and I must go and fight. I will be far away and you will be the only man in the house. You must take care of your mother. Soon her baby will come. I want a boy. I don't want a girl. If it's a girl, you must kill her. Then you must come and find me, and show me her blood. But if it's a boy, kill the black sheep and bring its blood to me."

The boy was unhappy.

"You must be a man now," his father answered. "Remember, I only want a son."

The soldier said goodbye to his family and went away to the war.

A few months later, the baby was born. It was a girl. Her brother looked at her. She was small and very sweet. She opened her eyes and smiled at him. He picked her up and held her in his arms.

"Little sister," he said quietly. "I'll never hurt you. I'll look after you. I promise."

He went outside and killed the black sheep. Then he took its blood and said to his mother, "Mother, I must go and find my father. I must tell him the news."

"No," his mother cried. "Your father wanted a son. He didn't want a daughter."

So the boy went to find his father. He travelled a long way, through the valleys and over the mountains. At last he found his father.

"Father," he said. "You have another son. I have killed the black sheep. Here is its blood."

His father was very happy.

"This is wonderful news," he said. "Stay here with me. We’ll celebrate together."

The boy looked at his father. He did not smile.

The little girl grew quickly. She was a beautiful child. Her brother loved her. He made her little presents. He told her stories and sang to her.

After a long time, the war ended.

"Your husband is coming home," everyone said to the boy’s mother. "It's wonderful news. Now you will be happy."

The boy was very worried. He ran to find his sister.

"Our father’s coming home," he said. "When he comes, don't run up to him. Don't call him Daddy. Don't try to kiss him. Be like the other children in the village. Then he won't know that you are his daughter."

The soldier came home. Everyone ran out to greet him. Only the boy waited at the house.

"Are you well, Father?" he said, but again he did not smile.

That night, the boy woke his sister and went outside.

"What are you doing?" she asked. "Where are you going?"

He untied his father's mule and lifted his sister on to its back. Quietly, they went away. They travelled all night and all the next day and at last they came to a big forest.

"We’ll stay here," the boy said. "Our father will never find us here."

The boy and his sister lived in the forest for many years. The little girl grew into a beautiful young woman, and the boy grew into a fine young man. Their life was difficult and dangerous. There were many ogres in the forest. The brother was brave and strong. He killed some of the ogres, but he could not kill them all.

One day, a clever young ogre was walking past the house. He saw the girl, and he fell in love with her.

Every morning he watched her house. Every morning, the young man went out to work in the fields. And every morning the ogre waited. When the girl was alone, he went to the house.

"You're so beautiful," he said to the girl. "Marry me. I’m very rich. You will have the best clothes and the best food and a big, beautiful home. Come away with me now. We can be married today."

"I can't marry you today," the girl said. "First we must ask my brother."

"But your brother hates ogres," the ogre said. "He has killed many of us. He will never let me marry you."

The girl looked at him. She liked him. He was handsome and rich.

"We must kill your brother," said the ogre. "Then we can be happy."

The ogre was angry.

Every day, the ogre came, and every day he asked the same question. "Who do you love most? Me or your brother?"

The ogre was very pleased.

"But how can we persuade my brother?" asked the girl.

"You must lie down on your bed," said the ogre. "Tell your brother that you're sick. Tell him that only my food can make you better. He'll come and look for me. I'll meet him, and give him some of my food for you."

"And after that what will we do?" asked the girl.

So the girl lay down on her bed. Soon her brother came home.

"Yes," the girl said. "I'm very, very sick. Only one thing can make the better."

"I need food from the young ogre," said the girl. "Get some for me quickly, or I'll die."

So the brother ran out to look for the young ogre. He ran fast. On the road he met an old ogre.

"Where are you going?" asked the old ogre.

"My sister is sick," said the young man. "She wants the young ogre’s food. Only that will make her better, she says."

The old ogre shook his head.

"You're in terrible danger," he said. "There is magic in the food of ogres. When your sister eats the food, she will change. Believe me, I know my people."

"And I know my sister," said the young man. "She will never hurt me."

"You won't listen to me," said the old ogre. "But I'll help you. The young ogre and your sister will try to kill you. Before they kill you, you must say to them, 'Kill me if you like. But then put my body on the back of my mule.  Put my rifle on the mule and send it out into the barley field.'"

Then the old ogre went away, and the young man ran on. Soon he met the young ogre.

He ran fast to the brother's house, and gave the girl some of his food. She ate it and she changed. Now she was ready to kill her brother.

Her brother came into the house. His sister was standing up.

So the young man tied his sister to the post of the house. They both laughed.

So the young man untied his sister from the post of the house, and she tied him to it.

Then she went to the door of the house, and called out, "Master, he’s ready. Come now and kill him."

The ogre ran into the house. He had a knife in his hand.

"Stop! Wait!" said the young man. "You’re going to kill me. I know that. But promise me one thing. Take my body, and put it on my mule. Put my rifle on the mule and send it out into the barley field."

So the ogre killed the young man with his knife and cut him in many places. He and the girl untied the body and put it on the young man’s mule. They put his rifle on the mule and they sent it out into the barley field.

The old ogre was waiting in the field. He took the mule to his house and lifted the young man's body off it. He breathed on the body. Life came back into it, and the young man stood up.

The old ogre gave him his rifle and said, "You're alive again. I've saved your life."

The young man thanked the ogre. He ran to his house. He killed the young ogre with his rifle, then he took his sister, and put her on the mule. He drove the mule back to his parents’ house.

"Look at your daughter," he said to them. "I saved her life but she killed me."

Exercises for The Little Sister