In the old days, before people learned how to be farmers and look after cattle, they found their food in the forests, mountains and deserts. They collected leaves and fruit and hunted wild animals.

T'ala is a kind of beer. 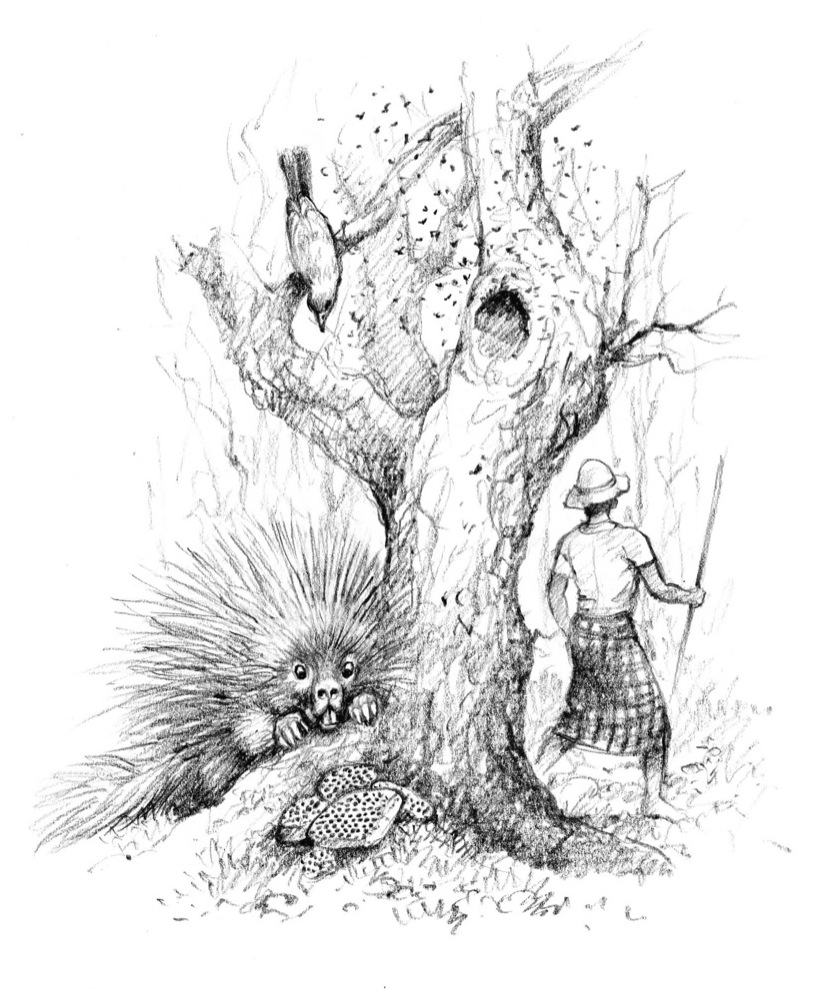 A little bird helped the honey hunter. He flew about in the forest and looked for honey. When he found honey, he called to the hunter, and the hunter came.

One day, the bird called the honey hunter to a big tree. Bees were flying round the tree.

"There's honey in this tree," the honey hunter thought. "I will make a fire, and the smoke will drive the bees away. Then I can take the honey."

So the hunter made a fire. The smoke rose up into the tree. The bees did not like the smoke. They flew away. Now the hunter could easily take the honey.

Soon, there was a big pile of honey under the tree. The hunter looked at it.

"I can't carry all this honey in my hands," he thought. "I need my goatskin sack. I will go home and fetch it."

So the hunter went home to find his sack.

There was a porcupine in the forest. She came to the tree and saw the honey.

"Honey!" thought the porcupine. "That's very good to eat. I will hide it, and call my friends. We’ll enjoy it together."

So the porcupine took the honey, and hid it. Then she went to find her friends.

Soon, the hunter came back with his goatskin sack. But the honey was not there.

"Where is my honey?" the hunter thought angrily. "A thief has taken it. Who is this thief?"

He looked carefully at the ground. He saw the marks of the porcupine's feet.

The hunter began to look for the porcupine. He looked in the forest. The porcupine wasn't there. At last he came to a cave. He heard a noise inside it.

"Someone is hiding in the cave," thought the hunter. "Perhaps it's the porcupine. Perhaps she has hidden my honey in the cave."

The hunter went into the cave. He saw an old woman. She was baking barley, and making t'ala.

Now, the old woman was not a real woman. She was a wicked witch.

"What do you want?" the witch asked the hunter. "Why have you come to my cave?"

"I was hunting for honey," the hunter said. "I found some in a tree. I went to find my goatskin sack, and I left the honey in the forest. When I came back, the honey wasn't there. I saw the marks of a porcupine under the tree. She took my honey, and I want to find her."

The witch said, "The porcupines are mine. Human people have sheep and goats, but we witches keep porcupines. We eat them. Don't touch my porcupines. Don't hunt them. If you do, trouble will come to you."

The hunter was angry.

"Your porcupine is a thief," he said. "She took my honey, and I want to find her."

"Then take this piece of bread," the witch said, and she put some bread into the hunter's hand.

The hunter ran out of the cave. At once, he changed into a porcupine. There was no hair on his head now, but sharp quills grew all over his body. He had no arms and hands. He had four legs, and four feet, and he ran along the ground.

"My relatives will help me," he thought. "My family will know me."

He began to run through the forest.

On the way home, he passed the honey tree. The fire was still burning there. The porcupine man went too close to the fire. It caught him, and set fire to his quills. They began to burn.

Quickly, the porcupine man ran to the river, and jumped into the water. The fire went out. He came out of the water again, and stood on the land. There were no quills on his body now. He was a man again. He had two arms and two hands. He walked on two legs.

The porcupine man is still in the forest. And he is still hunting for his honey.

Exercises for The Honey Hunter