The Cub and the Leopard 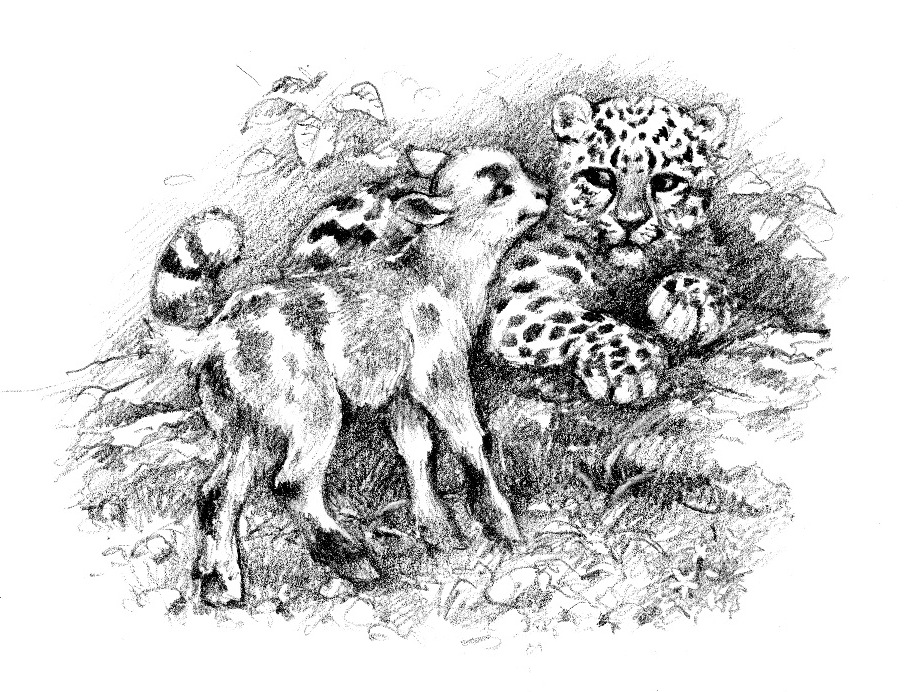 The mother leopard had a little cub. He was a beautiful young animal. His fur was golden and his spots were black. He was small, but he was strong.

In the same part of the country there was a mother goat. She had a little kid. The kid was a lovely little animal. His eyes were bright and his tail was long. He liked to run and jump.

One day, the leopard cub ran away from his mother to play. The goat's kid ran off to play, too. They met beside the river.

The leopard cub saw the kid and he liked him.

"Perhaps he will play with me," he thought.

The kid saw the cub, too.

So the cub and the kid played together. They ran and they jumped. They talked and they laughed. They rolled in the grass and they tried to catch butterflies.

When the evening came, the cub and the kid were friends.

"Will you come and play with me tomorrow?" said the cub.

The cub went home to his mother.

"Well, my son," the mother leopard said to him. "What did you do today?"

"Oh Mother," answered the kid. "I found a new friend."

"And who is your new friend?" asked his mother.

"Yes," answered his mother. "All leopards eat goats. Now listen. Tomorrow you will go and play with the kid again. Bring him home to me, and we will eat him for our dinner."

"Mother, I can't do that," the leopard cub cried. "The kid is my friend! How can I eat my friend?"

"Are you a leopard, or a mouse?" she asked. "If you are a leopard, you will eat the kid. And believe me, my dear, his meat will taste very good."

Not far away, the kid was talking to his mother.

"Now, my son," the mother goat was saying, "where did you go today?"

"Oh Mother," answered the kid. "I went to the river to play. I met a beautiful animal. He has golden fur, and his spots were black. We ran and jumped together. We talked and laughed together, and now he is my friend."

"Ah, my poor son," the mother goat said. "That was the leopard cub. A leopard cannot be your friend. Leopards eat goats. If you play with him again, he will try to eat you."

"Are you a goat, or a fool?" she said. "All leopards are our enemies. Don't you understand?"

"Then tomorrow," said the goat, "you must be careful. When you see the leopard's cub, you must run away."

The next day the cub ran out to play. The kid ran out, too. They met beside the river. The cub looked at the kid and his mouth watered.

"My mother was right," he thought. "The kid will be very good to eat."

"Hello, my little friend," the cub said. "Come and play with me."

He was lying down on his stomach, and his tail was moving in the long grass.

The kid looked at the cub, and he moved backwards. He was ready to run away.

The cub closed his eyes, and opened them again.

"But my mother wants to meet you," he said. "Come to my house with me. You will like it there."

"No," he said. "Yesterday we were friends. I liked you and we played together. But then you went to your house, and I went to mine. You spoke to your mother, and I spoke to mine. Goodbye, my friend. You are my enemy now."

"I have lost a friend," they both thought, and they were sad.

Exercises for The Cub and the Leopard