The Lion, the Fox and the Hyena 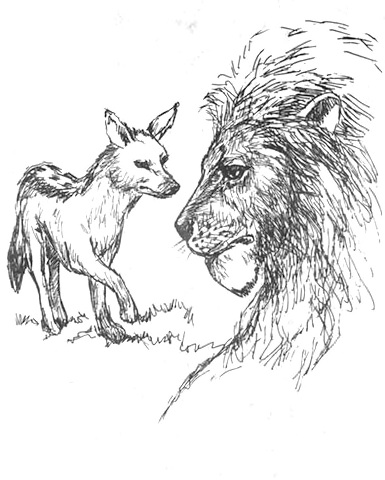 One day, the lion, the fox and the hyena went hunting together. They hunted from sunrise until sunset and they met again in the evening.

"What did you catch?" the fox asked the hyena.

"I killed a goat," the fox answered.

So the lion lay down and went to sleep.

The hyena was tired. He wanted to sleep too.

But the fox said, "Listen, my friend. You know the lion. He's big and strong. He always takes all the food. I'll go hunting again. I'll try to catch another animal. You and I can share it. But don't tell the lion."

So the fox went away to hunt again.

Soon, the lion woke up.

"Well," said the hyena. "You killed the camel, so the camel is yours. I caught the cow, so I can eat the cow. And the fox killed the goat, so the goat is his."

The lion was very angry.

"What?" he said. "You stupid animal! You're going to keep the cow and the goat for yourself and the fox?"

"But you only killed the cow because you had my help," the lion said. "She heard my voice, and she was frightened. Without me, you couldn't kill the cow. She's mine."

And he hit the hyena with his great paw.

The hyena's head came off and flew up into a tree. The lion made a hole in the ground and buried the hyena's body.

The fox was hunting for a long time, but he didn't catch anything. At last, he came back to find the lion and the hyena. On the way, he saw the hyena's head up in the tree.

He ran up to the lion.

"Aren't you hungry?" he said. "When are you going to start eating?"

"I'm waiting for you," said the lion. "We hunted well today. Look at all this meat. Tell me, fox, which of it is for you, and which is for me?"

"Oh thank you! Thank you!" said the fox. "It's very kind of you to ask my advice. You are the lion, the king of the forest! I'm only a poor, small fox. Of course, you can eat anything you like. But you asked my advice, and here it is. Why don't you eat the camel for your breakfast and the cow for your lunch? Then you can have the goat for your supper."

The lion was surprised.

"Oh," said the fox. "Don't worry about me. You eat first. Perhaps you'll leave a little bit. Perhaps there are some bits you don't like. I'll eat those."

"Hm," said the lion. "Yesterday, I thought you were a stupid animal, fox. Why are you suddenly clever today?"

"Well," the fox said, "yesterday I was only using my own head. But just now I saw the head of the hyena. It helped me to think too!"

Exercises for The Lion, the Fox and the Hyena